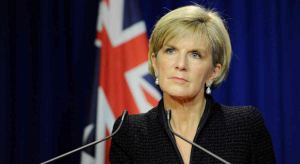 Speaking from Padang, near the epicentre of the fires blanketing South-East Asia at the Indian Ocean Rim Association Ministerial meeting, Ms Bishop said: “Clearly, Indonesia has a challenge in front of it.”

Padang is currently blanketed in a thick haze from illegal forest fires burning in Sumatra.

“They have asked for Australia’s support and we did provide firefighting equipment in the form of a lead plane and a Hercules that was here for a week, carried out about 22 runs and dropped about 300,000 litres of water over some of the forest fires,” she said.

“We have made it clear to the Indonesians that we also face a challenging time as we go into the bushfire season in Australia … so we will assess any request made of us, but most certainly in the context of our capacity to assist.

“We stand ready to assist Indonesia, it’s a regional challenge, and I know that other countries in the region are helping Indonesia fight this environmental challenge.”

Concern over the fires which have seen smoke spread as far south as Thailand will undoubtedly be raised by ministers at the meeting, along with defence cooperation, maritime safety and illegal fishing.

It is the only gathering that takes in most Indian Ocean rim nations.

During the day, Ms Bishop will have several side bilateral meetings including with her Indian and Bangladeshi counterparts.

She will also have a one on one meeting with Indonesian foreign minister Retno Masudi.

“We also have a good understanding of what we can do together on countering violent extremism, the issue of foreign terrorist fighters,” Ms Bishop said.

“Most recently I met with Marsudi in New York and we discussed the role Indonesia could play in a bridge in being a moderate Islamic nation, a bridge to other Islamic nations, and I’ll explore some of those ideas that she raised at that time.”

The pair met for the first time after the execution of the two Australian drug smugglers in April, in what Ms Bishop described at the time as a very candid encounter.

Australia withdrew its ambassador to Indonesia, Paul Grigson, in April this year to protest against the executions, and formal ministerial engagements between the nations stopped for months before beginning again in August.

“I have met foreign minister Marsudi on numerous occasions since then,” Ms Bishop said, in response to reporters’ questions about tensions following the executions.

“This will be my fourth meeting with her since August. We are focusing on matters where we can cooperate and collaborate, and there are so many areas of common interest and that is what we will be focusing on.”

The Indonesia government said it was a sign of the strengthening relationship that Australia had now arranged for a ministerial visit to Indonesia once a month.