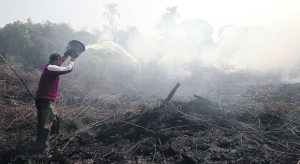 October 2, 2015 – Indonesia ridiculously claimed yesterday that they have enough resources to fight the forest fires that are causing the haze in the region, and does not need the assistance offered by Singapore at this time, Indonesian officials told a Singapore delegation yesterday.

It was convened at the invitation of Indonesia, according to a press release issued by MEWR today.

During the meeting, Singapore reiterated and explained its offer of assistance to tackle the fires, including the provision of one Chinook helicopter to conduct water bombing and one C-130 aircraft for cloud-seeding operations.

However, Indonesia clarified that it had enough resources of its own and did not need to call on the assistance offered by Singapore at this time, the ministry said.

The meeting also discussed law enforcement actions by Indonesia against errant companies, while Singapore explained how its Transboundary Haze Pollution Act allows it to take legal action against offenders who cause transboundary haze in Singapore to “supplement Indonesia’s actions while respecting Indonesia’s sovereignty”.

“Singapore also reiterated and explained its request for Indonesia to share information that could help identify companies suspected of causing such fires,” MEWR said, adding that the request is being considered by the Indonesian side, “who will respond in due course”.