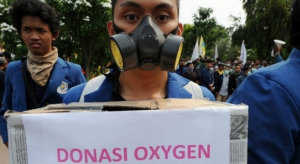 October 26, 2015 -A conservation scientist has described an acrid haze choking parts of South-east Asia as one of the worst ever man-made environmental disasters, saying that it is affecting about 40 million people.

“Not only is there appalling human suffering, with hundreds of thousands of people ill and many dead, the fires are a massive economic cost to the Indonesian economy,” said Professor Meijaard, an expert on Indonesia’s forests who co-ordinates the environmental program Borneo Futures.

Thousands of fires caused by slash-and-burn farming have blanketed parts of Indonesia, Singapore and Malaysia for almost two months, forcing many schools to close and flights and international events to be cancelled.

“This is a crisis,” said Halam Jemarican, head of Thailand’s Southern Environment Office.

The haze has also choked Brunei and even reached parts of Cambodia, the Philippines and Vietnam.

According to the World Resources Institute the fires, mainly in south Sumatra and south and central Kalimantan, have caused carbon emissions that have surpassed those of the entire United States – the world’s second largest emitter of greenhouse gases – on 26 out of 44 days since September.

On Saturday, Indonesia said it was preparing warships as a last resort to evacuate children and others suffering from smoke inhalation.

But Professor Meijaard said he believes Indonesia’s government has failed to recognise the seriousness of the problem.

“Are the few helicopters and water bombers, an insufficient supply of the right type of face masks, and some canals dug in the peat to guide waters to fires really the best the government can do?”

Professor Meijaard asked why Indonesia has not sent in a million soldiers to address the disaster. “Why is all government action so apparently lacklustre and unfocused?”

Professor Meijaard said what might help garner action is to call the disaster what it really is: the biggest environmental crime of the 21st century.

“BP’s Deepwater Horizon oil spill of 2010 looks relatively benign compared to Indonesia’s 2015 fire crisis … and that was one heck of a spill,” he said.

“And I consider it a crime, not just a disaster, because even though setting fire to land remains perfectly legal in Indonesia, endangering the lives of millions of people, destroying protected forests and their wildlife, and threatening the global environment are criminal acts.”

“If the government of Indonesia cares for its people, its economy, its wildlife and for people elsewhere in the world, it immediately must do more,” he said.