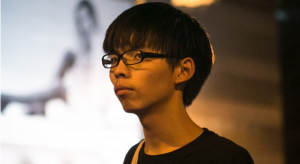 Wong, the teenage face of the “Umbrella Movement”, was charged along with fellow student leaders Nathan Law and Alex Chow last week, almost a year after the protest, in a move activists described as a “political prosecution”.

The charges relate to a protest in September last year that led up to widespread protests that blocked major highways and streets in the southern Chinese city.

The months-long protest starting in late September called for free elections for the semi-autonomous city’s next leader, opposing a blueprint laid down by Beijing that would have meant candidates were vetted by a loyalist committee.

That reform package was voted down by legislators in June, in an unprecedented rebuke to Beijing.

“This government is constantly limiting political freedom and freedom to protest,” Law, 22, told reporters outside the courthouse after also pleading not guilty to charges of inciting unlawful assembly.

Chow, 25, facing one charge of unlawful assembly, told reporters: “The one who’s done wrong is the government, not the people, not the fighters of the Umbrella Movement.”

The case was adjourned until October 30.

Wong, along with Law and two other activists, has also been charged with obstructing police at a protest in June last year.

They were opposing a “white paper” from China that asserted its control over the semi-autonomous city.

That case was adjourned on Friday to October 26.

“It’s frustrating and tiring, but I still think it’s worth paying the price,” Wong said at the time.