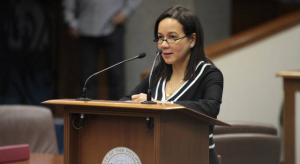 September 16, 2015 – The adopted daughter of Philippine movie stars launched her presidential campaign today, banking on her parents’ celebrity status to catapult her past the nation’s most powerful politicians.

Grace Poe, 46, is now in the running for the upcoming 2016 presidential elections. She is a relative political novice, having been a senator for just two years but recent election surveys has put her as a firm favourite for the top job.

However, this is if she manages to overcome legal challenges over her citizenship that could rule her out of elections in May next year.

In a packed hall at the University of the Philippines, one of the country’s most renowned educational institutions, Senator Grace Poe announced her bid for the presidency. The Liberal Party, the party of the present administration was initially priming her to be the running mate of Secretary Mar Roxas. Mr Roxas was recently chosen by incumbent President Benigno Aquino to be his successor.

However, Mrs Poe announced that she has opted to go as an independent candidate for the top position. She is seen as a strong contender for next year’s elections, garnering good support in recent surveys.

“She gives me hope. I know she is a good person and will make a good president, “69-year-old housewife Remedios Gamboa said.

“Her father is an action man who defended the poor. I believe the daughter will be the same,” she said.

The senator is considered a fresh face at a time when the public is seeking to move away from long standing family dynasties and the widespread corruption it encourages. In her speech, Mrs Poe highlighted the need to focus on education, agriculture and infrastructure development, sectors that has been poorly funded in the past.

I will strive to increase the annual infrastructure budget to 7% of the GDP,” said Senator Poe. “The government will support the private sector in formulating an industrialization and IT plan. As more products “Made in the Philippines” flourish, more jobs will be created. This should be done while taking care of our environment.

She also announced plans to fight corruption, drugs and crime.

Poe’s rise to frontrunner in the race to lead 100 million people in one of Asia’s most chaotic democracies is as film-worthy as her parents’ biggest hits.

Just several days old, an infant Poe was left in a Spanish-era church in the central Philippines where she was found by a movie fan, according to her official narrative. The fan then gave her to movie star Fernando Poe Jnr and his actress-wife, Susan Roces, who adopted her.

Poe’s opponents have filed legal challenges against her ahead of her planned presidential run, because she has no original birth certificate to prove she was born to Filipino parents.

She also spent time in the US and became a naturalised citizen, though she says she has since renounced this. Her adoptive father, more popularly known by his initials “FPJ”, had earned legions of fans playing the incorruptible village tough guy who slays monsters and criminals with magical swords and pistols that never run out of bullets.

But for other movie fans, the daughter still has to prove that she is worthy of their vote.

“I came here to hear her speak, to see for myself whether she loves the poor,” 49-year-old housewife Araceli Gaban said.

“I believe she is sincere, but she has to prove to me that she’s not some politician who would wash her hands after shaking mine,” said the mother of five from suburban Manila.