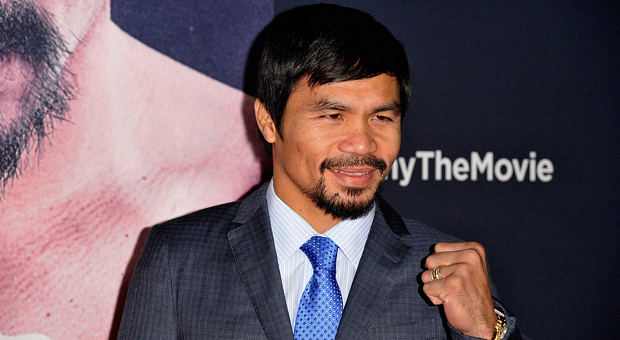 April 29, 2016 – Boxing legend Manny Pacquiao smiles as he soaks up the sounds of adoring fans screaming his name, their cheers heralding a new career as one of the Philippines’ most powerful politicians.

After winning his farewell fight against Tim Bradley, the eight-time world champion hit the campaign trail this week in a bid to secure a seat in the Senate when Filipinos go to the polls on May 9.

Pacquiao’s rise from desperate street kid to boxing superstar has made him one of the nation’s biggest heroes and, in a nation where celebrities often become lawmakers, he is effortlessly translating sporting success into the political ring.

Surveys show Pacquiao is virtually guaranteed to win a Senate seat and his journey through shanty towns near Manila, where he threw caps and other souvenirs to joyous fans holding life-sized posters of him, appeared more a victory lap than an effort to convince sceptical voters.

“I’m happy campaigning right now. So many people are shouting, cheering for me. I’m glad with the warm welcome in every rally. I really didn’t expect that,” Pacquiao said yesterday during a break from the festivities.

With constant speculation that another mega-bucks bout against American rival Floyd Mayweather might lure him out of retirement, Pacquiao insisted he was enjoying “retired life” and that he was not thinking about boxing at all.

“I’m now a full-time politician. I remember when I dedicated myself to be a boxer and become a champion. It’s my feeling right now,” he said.

Pacquiao, who has served two terms as a congressman, is running for a seat in the 24-member Senate as part of a long-term strategy to become president, a not unrealistic ambition given his wild popularity.

Pacquiao’s international reputation took a huge hit in February when the devout evangelical Christian described homosexuals as “worse than animals”.

Major sponsor Nike immediately cancelled its partnership with him and a host of US celebrities voiced outrage.

But the comments had far less impact in the Philippines, with surveys showing his popularity slumping only slightly afterwards then quickly recovering.

Boosted by his success against Bradley this month, Pacquiao is now in third place in the Senate race and a near certainty to take one of the 12 seats available, according to the latest survey from a major pollster.

Campaigning in the bustling city of San Pablo Thursday, there was no sign of rancour. Vendors and tricycle drivers mobbed Pacquiao as he got off a flatbed truck, eager to touch their hero and pose for selfies.

A high school drop-out, Pacquiao entered boxing to feed his family, and he says his political ambitions are anchored in his desire to help the poor.

He is promising to increase the salaries of teachers, offer scholarships to poor students and give subsidies to farmers, selling himself as a beacon of hope for millions of poor who have not felt the benefits of stellar economic growth under President Benigno Aquino.

“I tell them not to be discouraged because our life was worse than theirs. We did not have our own house, our own land and sometimes even food,” Pacquiao said.

“I experienced what it was like to sleep on the streets. I want to serve so they will be proud that Manny is for the poor.”

Many in San Pablo said they were drawn to Pacquiao’s message, as they talked about their own hardships.

“I hope we get training because the government and companies only prioritise graduates but we have no diploma.”

“He is already rich so he will not be corrupt. I hope he just gives his salary to the poor,” he said.

Answering his critics, who say he is not fit to be a senator because he has little education or track record as an effective lawmaker, Pacquiao insisted his rags-to-riches story was enough to qualify him for the job.

“God raised me from nothing into something. I think I am the right person, the best person to answer the poor,” he said.