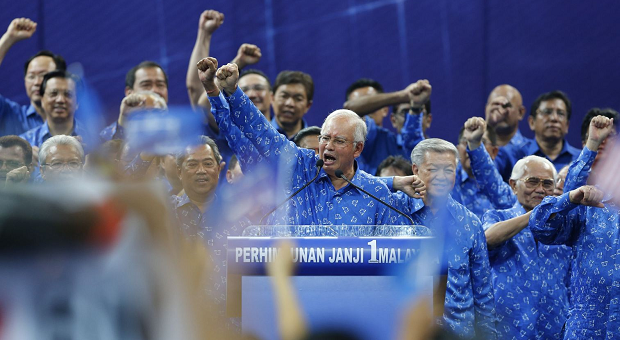 June 17, 2016 – Malaysia will see two by-elections on the west coast of the peninsular this tomorrow.  The two by-elections will be held in Sungei Besar and Kuala Kangsar. Both seats were left vacant following the deaths of MPs from the ruling Barisan Nasional (BN) coalition in a helicopter crash in May this year.

Prime Minister Najib Razak’s ruling Barisan Nasional (BN) coalition is looking to secure a bigger margin of victory in both seats. Both are considered strongholds of BN. In the last election, BN retained Sungai Besar with a majority of less than 400 votes. It won Kuala Kangsar with a majority of over 1,000 votes.

Political analysts said they expected a 70 per cent voter turnout, a lot lower than the almost 90 per cent turnout in the previous election. Most young voters work away from their constituencies outstation, and so are thought to be unlikely to return to their home states to cast their votes.

Campaigning in both constituencies has been low-key, as the majority of constituents were observing the fasting month of Ramadan.

Ibrahim Suffian, a pollster, said that overall, voters were subdued. “We are expecting turnout to be lower,” he said. “Fatigue is one [reason], and many voters are working in the cities.”

Opposition leaders, worried by the prospect of a low turnout, have been reaching out to parents to urge their children to return and vote.

Tian Chua, Vice-President of the People’s Justice Party (PKR), said that they were launching a campaign to urge younger voters to return.

“We are launching this campaign urging their children to come back to celebrate Father’s Day [on Jun 19], and at the same time, exercise their duties as citizens, to show their love for their parents and for their country.”

Pollsters said that opposition candidates were cannibalising each other’s support. The Islamic party PAS and its offshoot Amanah have each fielded their own candidates.

“The problem now is the opposition is fragmented, their votes are dissipated,” said Mr Ibrahim. “Even though the people do not like the government, they can’t quite come together to channel their support of the opposition.”

Budiman Mohd Zohdi, the BN candidate for Sungai Besar, is a seasoned politician. He said that he is confident of securing a bigger margin of victory than before.