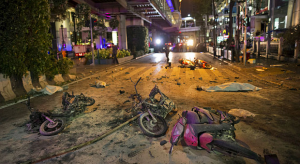 Contrary to local media reports, the majority of business and transport services are expected to operate as normal. Road closures were effected in central Bangkok, but have begun to re-open, with the exception of the Skywalk elevated footpath, which remains partially closed. Skytrain remains operational.

A significant deployment of security forces will remain in the area and in the Silom, Thong Lo and Sukhumvit areas over the near-term. Travel disruptions as a result of salvage operations and elevated security measures are expected to persist in central Bangkok. Although Thailand carries a medium risk of terrorism, the latest incident is significant as it took place in Bangkok and was of a scale not previously experienced in the city.

Risk analysts at Red24 said while there have been no claims of responsibility for the attack, there is a possibility that the attack was orchestrated by Malay Muslim militants currently conducting an Islamist insurgency in the south of the country. Alternatively, it is a possible that a group or an individual with grievances against the political status quo, following a military coup in May 2014, could have been responsible for the 17 August attack.