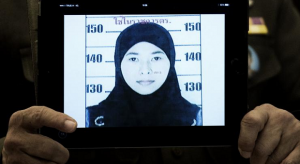 August 31, 2015 – Relatives of a Thai woman sought in connection with the bombing at Erawan Shrine on August  17 believe she is in Turkey.

National police spokesman Prawut Thavornsiri identified one of the new suspects in the Erawan Shrine attack as 26-year-old Wanna Suansun, a female Thai national. In a televised broadcast, Prawut showed a photograph of the woman, taken from an identity card, showing her wearing a black hijab.

This is the first time that Thai authorities have named a suspect before their apprehension, in the ongoing investigation. Prawut also showed a sketch of an unidentified man with a moustache.

Meanwhile, the Thai police chief announced Monday that officers investigating the country’s worst bomb attack will be given a $83,000 reward for arresting the main suspect.

“The accomplished work that led to the arrest is truly the work of the authorities and their investigative abilities,” Somyot Pumpanmuang reportedly said, at a news conference. “This was the work of the Thai authorities, there were no tip-offs.”

Thai police said earlier today that they found “bomb-making materials” during a raid of a second apartment on the outskirts of Bangkok. The raid was reportedly conducted in Min Buri district, near the neighborhood where police on Saturday arrested the main suspect in the Erawan Shrine attack.

Police found fertilizer, gun powder, digital clocks and remote-controlled cars, parts of which can be used for detonation, among other items, during the raid at the apartment over the weekend, national police chief Prawuth Thavornsiri said.

“These are bomb-making materials,” Prawuth reportedly said. “Nobody would keep urea fertilizer and gunpowder unless they wanted to make a bomb.”

Police are reportedly looking to issue at least three arrest warrants, Prawuth reportedly said, but declined to give more details.

On Saturday, police arrested an unnamed foreigner in connection with Thailand’s worst bomb attack that killed 20 people, mostly foreigners, and injured over hundred people. Illegal explosives, bomb-making equipment that included detonators and ball bearings, and a fake Turkish passport, were reportedly seized during the raid Saturday.

Police said last week that they were examining pictures of Turkish nationals, who arrived in the country in the 15 days preceding the shrine attack, after suspecting Turkish involvement. However, authorities are still unclear about the suspect’s nationality, motive and his link to the attack, Prawuth reportedly said, adding that another attack in the country was “possible” as police found 10 detonators.

“We still have to work out the details,” he said. “But we are very certain he’s part of the network” that carried out the August 17 bombing at the Hindu shrine, one of Bangkok’s famous tourist attractions.

Yesterday, Prawuth reportedly said that that the interrogation of the main suspect is moving slowly.

“He is not cooperating much. From our preliminary investigation, we think he isn’t telling us the truth,” Prawuth reportedly said, declining to elaborate. “He told us how he entered Thailand but we don’t believe everything he says.”

Police are working with “a number of embassies” and interpreters to establish the man’s nationality.