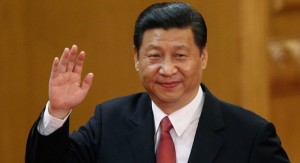 Communist parties rule both countries and trade has swelled to US$50 billion annually, but Vietnam has long been suspicious of its giant neighbour, especially over Beijing’s increasingly assertive claims to almost the entire South China Sea.

Anti-Chinese violence flared in Vietnam last year after a US$1-billion deepwater rig owned by China’s state-run CNOOC oil company was parked 240 kilometres off the coast of Vietnam in the South China Sea.

Since then, however, China has sought to make amends with Vietnam, including sending senior officials to Hanoi. Meeting in Beijing’s Great Hall of the People, Xi told Nguyen Phu Trong, general secretary of Vietnam’s Communist Party, that cooperation was good for the two countries, the China News Service reported.

“(We) must strictly abide by the important consensus the leaders of both parties have reached, jointly properly manage and control maritime disputes, maintain the broader picture of relations and peace and stability in the South China Sea,” the report quoted Xi as saying.

Trong told Xi that Vietnam put great store on having friendly relations with China, which was Hanoi’s long-term strategic policy, the report added.

The official Xinhua news agency, in a commentary ahead of the visit, said the two countries had “managed to ride out a considerably disturbing episode” in their dispute over the South China Sea. But it warned of problems ahead.

“Some outsiders, for selfish reasons, are exploiting every possible excuse to sow discord between them, while a few in Vietnam’s political circle have been deluded by external Pied Pipers and become accomplices,” it added, without elaborating.

Vietnam has strengthened its military relationship with old enemy the United States since the South China Sea dispute has heated up following Xi’s assumption of power in 2013, and Vietnam has also sought common ground with the Philippines on facing China over the spat.

China claims about 90 per cent of the South China Sea, displaying its reach on official maps with a so-called nine-dash line that stretches deep into the maritime heart of Southeast Asia. The Philippines, Malaysia, Brunei and Taiwan also have claims to parts of the potentially energy-rich waters that are crossed by key global shipping lanes.