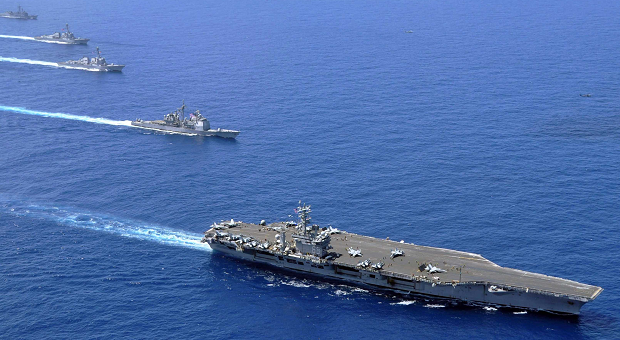 The latest developments came as a U.N. arbitration tribunal this week ruled that China’s vast territorial claims are violating international maritime law. The Hague-based Permanent Court of Arbitration ruled in favor of the Philippines, which challenged Beijing’s expansive claims to virtually the entire South China Sea. Beijing says it does not recognize the decision.

“Despite the opposition of Vietnam and concerns by the international community, those actions conducted by China have seriously violated Vietnam’s sovereignty and are unlawful and cannot change the fact about Vietnam’s sovereignty over the Hoang Sa and Truong Sa archipelagoes,” Binh told reporters, referring to the Paracel and Spratly islands in the South China Sea.

Binh reiterated that Vietnam has all “legal basis and historical evidences” to affirm its sovereignty over the two island chains.

Six regional governments have overlapping claims in the South China Sea, waters that are rich in fishing stocks and potential energy resources and where an estimated $5 trillion in global trade passes each year.

In Beijing, Chinese Foreign Ministry spokesman Lu Kang said Thursday that “if anyone challenges China’s rights and interests by taking provocative actions” based on the ruling, “China will surely make a resolute response.”

Vice Foreign Minister Liu Zhenmin on Wednesday said that said Beijing could declare an air defense identification zone over the waters if it felt threatened, a move that would sharply escalate tensions.

Although it claims some of the same land features as the Philippines, Vietnam welcomed the arbitral decision initiated by Manila and took a strong position against Beijing in the 10-member Association of Southeast Asian Nations.