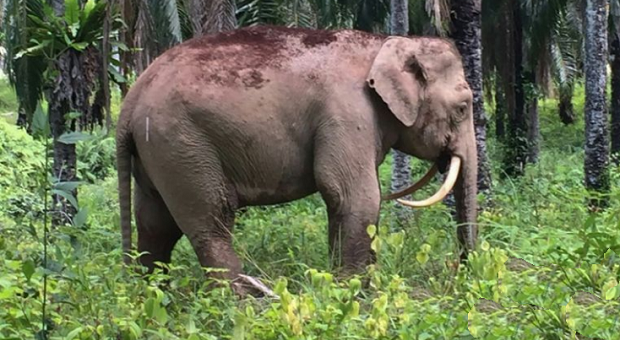 August 12, 2016 – A rare pygmy elephant with tusks growing downwards instead of up to give it a look like a sabre-toothed tiger has been found in Malaysia.

The unusual looking animal was found by a team of wildlife experts at a palm oil planation in the Malaysian state of Sabah on Borneo island yesterday.

“It is very rare,” said Sabah Wildlife Department’s assistant director Sen Nathan. “We’re not exactly sure why the tusks are like that but it could be a congenital defect or maybe because of inbreeding.”

A similar elephant was caught on camera a few years ago and in 2015 in Sabah, Nathan said.

The wildlife department plans to send the animal to an elephant sanctuary in Sabah on Saturday until a suitable area in the wild is found where it could be released with a tracking device attached.

“The tusks resemble the prehistoric sabre-tooth tiger, but of course, they are not related,” said Andrew Sebastian, co-founder of the Ecotourism and Conservation Society Malaysia.

“It could make wildlife watching in Sabah more interesting.”

But Sebastian warned that the rare elephant’s reversed tusks might create some problems when it comes to jostling with other elephants.

A study done a decade ago showed there were about 2,000 elephants in Sabah. Wildlife officials said a new study will be conducted soon.

The biggest threat to elephants in Sabah was not poaching, but loss of habitat due to modernisation and an increase in the human population, said Nathan.