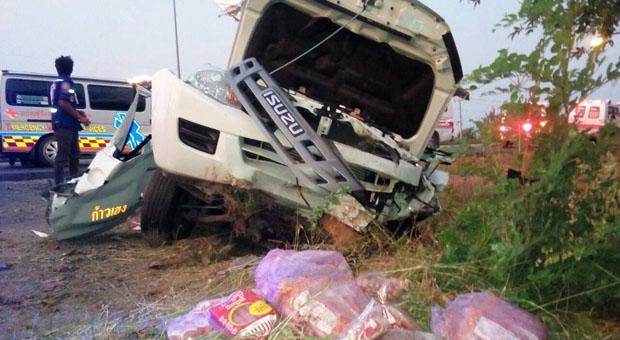 February 25, 2016 – A pickup truck delivering about three tonnes of meatballs crashed into a roadside drain, killing the driver and injuring his passenger, in Prasat district early this morning, police said.

The accident occurred about 5.30am on Highway 24 at Ban Nong Krabue village in tambon Tani.

Siwaphan Meesee, 23, who sustained serious injuries, told the police the modified pickup truck, driven by Pornchai Kraiphet, 30, was delivering about three tonnes of meatballs from a factory in Muang district of Chachoengsao province to a client in Roi Et province when it skidded off the road.

The vehicle was badly damaged. No other vehicles were involved in the accident. Mr Siwaphan said he was asleep on the passenger seat next to the driver when the accident occurred.

He was thrown from the vehicle by the impact. Pornchai, the driver, died at the wheel.