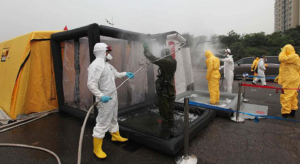 August 19, 2015 – The chemicals stored at the Tianjin warehouse where two explosions occurred last week have been identified, the vice mayor of Tianjin Municipality said at a press conference this afternoon.

He Shushan said the warehouse had stored about 40 substances across seven categories, including around 1,300 tonnes of oxide compounds, mainly potassium nitrate and ammonium nitrate; 500 tonnes of inflammable materials, consisting of metallic sodium and magnesium; and 700 tonnes of highly toxic substances, mainly sodium cyanide. He also added that caffeine had been found at the site.

Most of the chemicals were detected at the core area of the blast site, around which cofferdams have been installed to reduce the risk of contamination, he said.

About 100 kilograms of chemicals had been detected within a three-kilometer radius of the core blast site, he said.

The cleanup operation is still under way but must be suspended when night falls and during rain, the vice mayor said.

As of this afternoon, 150 tonnes of sodium cyanide has been removed from the core blast area and sent to its manufacturer to be processed, he said.