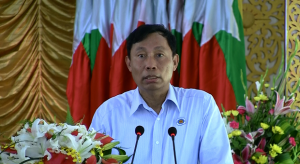 Mr Shwe Mann, of the military-backed Union Solidarity and Development Party (USDP), posted a statement on Facebook congratulating his rival from the opposition National League for Democracy (NLD).

He was running in Bago region’s Phyu township constituency.

Previously, his son had said in a Facebook post that his father had lost his bid for a seat.

Although ousted as leader of the USDP in August, Mr Shwe Mann, formerly a top-ranking member of the junta, had been seen as a presidential contender.

Incomplete vote counts showed some of the most powerful politicians of the ruling USDP trailing, indicating a heavy loss for the party created by the former junta and led by retired military officers.