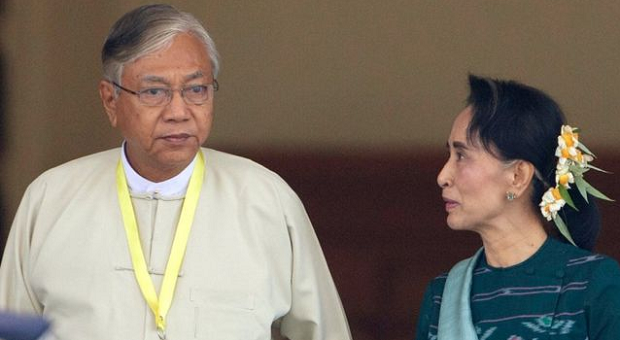 Htin Kyaw, 69, won 360 of 652 votes cast by Myanmar’s two legislative chambers, paving the way for him to serve in place of the Nobel laureate who is constitutionally barred from becoming president.

Htin Kyaw will be the former junta-run nation’s first civilian leader in decades when he replaces Thein Sein next month.

MPs erupted into applause after Htin Kyaw’s victory was announced following a lengthy ballot count by hand in the capital Naypyidaw.

“I hearby declare that U Htin Kyaw has been elected the president with the most votes,” parliamentary speaker Mann Win Khaing Than told legislators.

The NLD had 390 votes in the joint upper and lower house vote, while the military and former ruling party USDP had just 207. Sixty other votes were held by others, mostly smaller ethnic parties.

Myanmar is in the grip of a stunning transformation from an isolated and repressed pariah state to a rapidly opening aspiring democracy.

But the military remains a powerful force in the Southeast Asian nation and refused to change a clause in the junta-era constitution that bars Aung San Suu Kyi from top political office.

The veteran activist instead vowed to rule “above” the next leader.

Her choice of Htin Kyaw to act in her place is seen as a testament to her absolute faith in his loyalty.

Aung San Suu Kyi is barred from the presidency by a clause in the charter because she married and had children with a foreigner.

It is not yet clear what role she plans to take or how she will manage the relationship with Htin Kyaw.

The 69-year-old has long been part of Aung San Suu Kyi’s inner circle while his wife Su Su Lwin is a sitting NLD MP whose late father was once party spokesman.

In a varied career Htin Kyaw worked as a university teacher and also held positions in the industry and foreign affairs ministries in the late 1970s and 80s before retiring from government service as the military tightened its grip.

A new cabinet, set to be announced at the end of the month, is expected to include figures from across the political spectrum as Aung San Suu Kyi looks to promote national reconciliation.

It will swiftly set about facing the country’s many challenges, including poverty, civil wars in ethnic minority borderlands and decrepit infrastructure.

Senior party figures say one of the government’s first tasks will be to whittle down myriad ministries by combining overlapping portfolios.