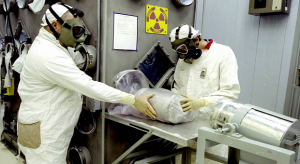 Japan plans to open as early as next spring a plant that could reprocess enough spent reactor fuel to make as many as 1,000 nuclear bombs a year. The plutonium that is produced is supposed to be for generating electricity, but Japan already has tons on hand and no use for it, with its reactors at a virtual halt following the 2011 Fukushima Daiichi disaster. Local politicians are aggressively backing the plant, eager for investment in a remote northern region.

For the first time, China has prior consent to extract plutonium from the spent fuel generated in U.S.-designed reactors. The plutonium could potentially be used for nuclear weapons, though the agreement bars the use of American technology for military purposes. South Korea could also get permission to reprocess within six years.

Some lawmakers say that sends the wrong message.

“We should not leave doors open for our partners to use U.S. technology to process spent nuclear fuel in ways that produce material that can be used as the building blocks for nuclear weapons,” Democratic Sen. Ed Markey told the Senate Committee on Foreign Relations last week.

Reprocessing is the method by which spent reactor fuel is recycled chemically to separate nuclear waste from plutonium that can be used as fuel.

From the inception of its nuclear energy program, Japan decided to pursue reprocessing to provide a self-sustaining nuclear fuel source. But technical hurdles and the growing availability of uranium on the international market has diminished the economic rationale.

Japan has already accumulated a massive stockpile of plutonium it sent overseas for reprocessing. There are 11 metric tons in Japan and another 36 metric tons reprocessed in Britain and France waiting to be returned to Japan — in all enough for nearly 6,000 atomic bombs.

Few question Japan’s opposition to nuclear weapons. It is the only nation to have suffered an atomic attack, and unlike nuclear-armed China, it has an impeccable nonproliferation record. Like South Korea, Japan relies on U.S. nuclear deterrence in the face of the growing threat from North Korea.

But experts say that if Japan opens the Rokkasho Reprocessing Plant when it’s unclear how it would use the plutonium, alarm bells would ring in Beijing and Seoul, which are already suspicious of the current government’s tougher national security posture. Some fear a regional fissile production race could ensue.

“It sets a bad example, precisely because Japan is such a well-respected country in terms of non-proliferation. If in future a different country starts to stockpile — could be enriched uranium, it could be plutonium — that country could cite Japan as a precedent,” said James Acton, author of a new report on Japan’s reprocessing policy at the Carnegie Endowment for International Peace think tank.

President Barack Obama, who has made international nuclear security a policy priority, has highlighted the dangers of stockpiling fissile material.

“The very process that gives us nuclear energy can also put nations and terrorists within the reach of nuclear weapons. We simply can’t go on accumulating huge amounts of the very material, like separated plutonium, that we’re trying to keep away from terrorists,” Obama told a nuclear summit in Seoul in 2012.

But Robert Gallucci, a former chief U.S. negotiator with North Korea, has criticized the administration for failing to address the threat posed by what he calls a “tsunami of rising plutonium stocks.”

China, which has its own military stockpile of 1.8 metric tons of plutonium, has yet to decide to reprocess spent nuclear fuel on a commercial scale for its fast-growing atomic energy industry. But its new 30-year agreement with the U.S., negotiated by the Obama administration, allows for that eventuality.

The proposed 20-year U.S. agreement with South Korea, currently under congressional review, provides a pathway toward reprocessing as early as 2021 pending the results of a joint study into the viability of a method of recycling nuclear waste called pyro-processing.

Republican Sen. Bob Corker of Tennessee said the Obama administration was leading Seoul “with a bread trail toward reprocessing” and undermining the goals of nonproliferation.

“It’s as if they are being treated less well (than Japan) if we did not allow them to do this,” said Corker, the chairman of the Senate Foreign Relations Committee.

Thomas Countryman, U.S. assistant secretary of state for the Bureau of International Security and Nonproliferation, said it was a “reasonable compromise” with Seoul to postpone the decision on the right to reprocess. He denied that regional competitiveness entered into the negotiations.

“The message for partners in East Asia or anywhere else is that decisions about enrichment and reprocessing technologies must be transparent, must be economically logical and must be defensible on the basis of the physical security and the safeguarding of such fissile material,” he told the hearing.

Whether the Rokkasho plant meets those standards is doubtful.

But the economic fundamentals of the delay-plagued plant are lousy.

Now scheduled to be completed in March 2016, it has cost $22 billion so far — four times the planned cost in 1989. Further delays are likely because of stricter safety screening by the nuclear regulators required after the Fukushima disaster. The plant depends on nine regional utilities for funding, based on their reactor operations, the prospects for which are uncertain. Most experts contend it would make more sense to bury the nuclear waste in concrete casks rather than try to recycle it.

But local pressure to proceed with the plant is intense. The local prefecture wants the jobs and has threatened to demand the removal of the more than 3,000 tons of spent fuel if the project falls through.