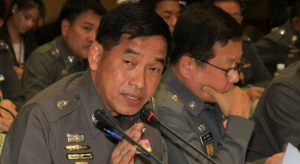 June 25, 2015 – Airport officials in Thailand say they followed proper security measures and gave no special treatment to Bangkok’s former police chief, who was arrested earlier this week in Tokyo with a loaded gun in his carry-on.

Lt. Gen. Comronwit Thoopgrajank was arrested on Monday at Tokyo’s Narita International Airport on his way back to Bangkok.

His arrest has directed an unwanted spotlight on Thailand’s aviation sector, shortly after the U.N. body regulating world air traffic said it had failed to meet a deadline for addressing safety concerns.