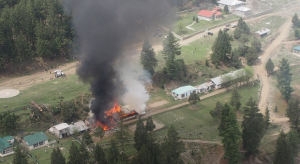 May 8, 2015 – At least seven people, including ambassadors of Norway and Philippines, were killed and 10 others injured in a military helicopter’s crash-landing in Pakistan’s north Gilgit region earlier today, the army said.

Major Asim Saeed Bajwa, Director General of Inter-Service Public Relations (ISPR), the mouthpiece of Pakistani Army, said on his twitter account that the accident happened due to a technical fault.

Three army helicopters were ferrying the local and foreign guests from Gilgit airport to Naltar valley when an MI-17 carrying 11 foreigners and six Pakistanis crash-landed in a school, he said.

The ISPR said wives of Indonesian and Malaysian ambassadors, two Pakistani pilots and an engineer were also killed in the accident.

The ambassador of Philippines Domingo Lucenario Jr. and ambassador of Norway Leif Larsen were among 57 people who were going to Naltar valley of Gilgit on a four-day trip.

The trip was arranged mainly for tourism, but the ambassadors were expected to hold high-level meetings, including one with the chief minister of Gilgit Baltistan.

Prime Minister Nawaz Sharif was travailing in a separate aircraft for the inauguration of two projects in the valley.

He canceled the ceremony and announced a one-day mourning for the incident.

The premier also expressed sorrow over the mishap and extended condolences to the families of the deceased.

Local media reported that the helicopter was set to land in a school but met an accident at about 10:45 a.m. local time (0545 GMT). It caught fire and resulted in the fatalities but no loss of life was reported on the ground.

The army has formed a board of inquiry to investigate the accident and a Crisis Management Cell (CMC) has been established at the Foreign Ministry.

Planes of Pakistan Air Force will airlift the bodies and injured people to Islamabad.

Meanwhile, Pakistani Taliban claimed the responsibility for bringing down the MI-17 helicopter.

“The special task force of the Tehrik-e-Taliban Pakistan (TTP) had prepared a special plan during the visit of the prime minister but he escaped as he was in other helicopter,” a purported TTP spokesman said.

He said the helicopter was shot down by an anti-aircraft missile.

The minister extended heartfelt condolences to the families of the pilot, crew members and foreign dignitaries.

“I want to express my profound sorrow and deep grief over the sad incident of helicopter crash in Naltar valley, Gilgit Baltistan in which several persons including ambassadors and their family members lost lives and other received injuries,” he said.