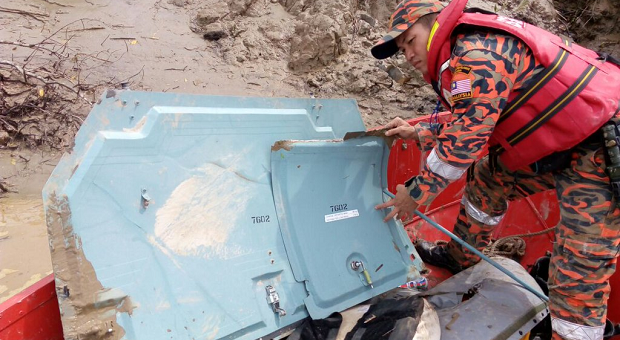 May 6, 2016 – Search and rescue officials in Malaysia have located the suspected debris of a helicopter that went missing in Sarawak yesterday, Prime Minister Najib Razak announced today.

Part of a floatation device and part of a helicopter wall, was found near Batang Lupar in the east Malaysian state. Also found were a rotor blade, part of the body of the helicopter and a seat, said Azharuddin Abdul Rahman, the Director General of the Department of Civil Aviation during a briefing in Kuching.

On speculation that the helicopter crashed in the river, Mr Azharuddin said: “It’s too early to tell. Let the investigation team, the investigators, look at this.”

Malaysia’s fire and rescue department said search personnel found the body of a woman near sungai Batang Lupar at 12 noon.

Six people, including a Malaysian deputy minister and an MP, were on the flight from Kuching to Betong.

According to Sarawak police commissioner Mohamad Sabtu Osman, the helicopter took off at 4.12pm and lost contact with the base at 4.32pm. The ride from Betong to Kuching typically takes 35 to 45 minutes.