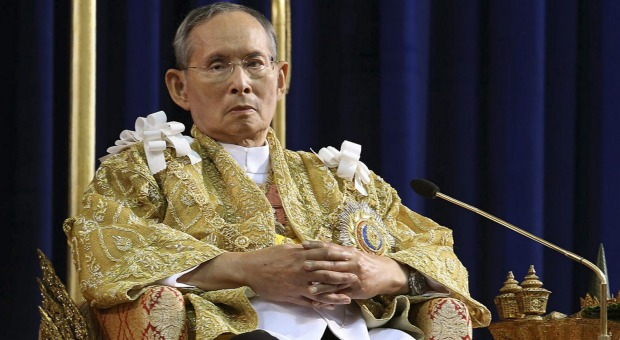 August 2, 2016 – Thailand’s 88-year-old king, the world’s longest reigning monarch, has been treated for a low fever and a “possible infection” in his blood, the palace said in a statement yesterday.

The palace, in what it said was a monthly update on King Bhumibol Adulyadej’s health, said a team of physicians also monitored the monarch last month for a build up of cerebrospinal fluid.

News about the king’s health is closely monitored in Thailand, where King Bhumibol is deeply revered.

The king has been treated for various ailments over the past year at Bangkok’s Siriraj Hospital and was last seen in public on Jan. 11, when he spent several hours visiting his palace in the Thai capital.

Anxiety over the king’s health and an eventual succession has formed the backdrop to more than a decade of bitter political divide in Thailand that has included military takeovers and sometimes violent street demonstrations.

“In the month of July 2016 a low fever was present,” said the palace statement. “Blood tests showed a possible infection and physicians therefore had to administer antibiotics. After the treatment His Majesty’s condition showed some improvement.”

In a June statement the palace said the monarch was being treated for “water on the brain”, or hydrocephalus, a build-up of the cerebrospinal fluid that surrounds the brain.

News about the royal family is tightly controlled in Thailand, where laws protecting the royals from insult make it a crime to defame, insult or threaten the king, queen, heir to the throne or regent.