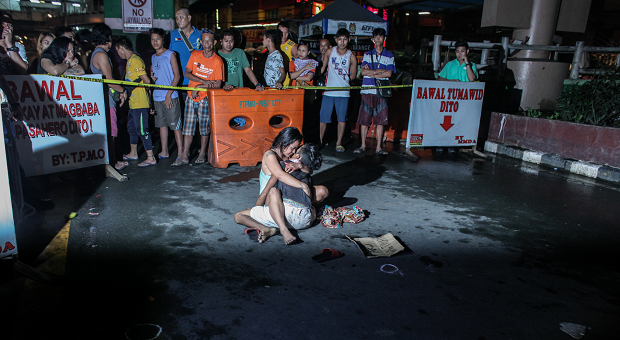 August 4, 2016 – Men shot and left to bleed out on busy streets, mutilated corpses dumped in vacant lots. The bodies are piling up as President Rodrigo Duterte’s drug war brings terror to Filipino slums.

Hundreds of people have died since Duterte won a landslide election in May, promising to rid society of drugs and crime in six months by killing tens of thousands of criminals.

In one viral image summing up the human cost, a young woman howls in pain as she cradles her partner’s blood-soaked body under the glare of television lights as horrified bystanders look on from behind yellow police crime tape.

“My husband was innocent. He never hurt anyone,” Jennilyn Olayres said of her partner Michael Siaron, 30, a tricycle driver — refuting the crude cardboard poster left behind by the motorcycle-riding gunmen killers saying “drug pusher”.

Police figures showed this week that 402 drug suspects had been killed since Duterte was sworn in at the end of June. That figure does not include those slain by suspected vigilantes.

Local media reported that 603 people had been killed since Duterte’s May election, with 211 murdered by unidentified gunmen.

Police raids of suspected drug dealers’ hideouts have led to near-nightly deaths. Most of the dead suspects — often found face-down in pools of blood — had pistols lying next to them in the act of resisting arrest, according to authorities.

Suspected sympathy killings by anti-drug vigilantes have also left a trail of death. One man was attacked as he drove his tricycle, his body left hanging from the humble vehicle as blood dripped onto the street.

Other people have simply turned up dead in deserted streets and vacant lots at night, their faces cocooned in packaging tape and with cardboard signs accusing them of being drug dealers hanging on their chests.