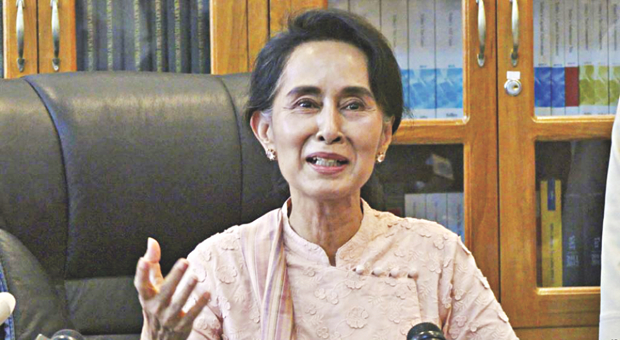 Suu Kyi has made peace a flagship policy of her new government, which took over in March after decades of brutal junta rule.

She has strived to reach a ceasefire with a number of ethnic minority militias that have battled the national army for decades.

Yesterday she held talks with rebel leaders to try to encourage a handful of remaining militias to sign a ceasefire agreement before a peace conference planned for the end of August.

But while rebel negotiators said the talks were “positive” they warned that little progress could be made with fighting still underway in some areas.

“There are still many groups fighting with the army on the ground,” Khu Oo Reh, the head of the rebels’ Delegation for Political Negotiation, told reporters in Yangon earlier today, saying the planned August peace conference date meant time was running out to reach an agreement.

“Although our country got independence, we haven’t enjoyed the taste of independence yet. So we can say that we are still struggling and fighting for a second independence,” he added.

Myanmar has been scarred by ethnic conflicts ever since independence from Britain in 1948, with minority groups battling for greater autonomy against a central government that they believe has long ignored and abused them.

Suu Kyi has vowed to overturn that painful legacy.

However, conflicts continue to rage in several areas between ethnic minority armed groups and the army, which operates beyond the reach of civilian government, particularly in northern Kachin and eastern Shan states.

Some 240,000 people have been displaced nationwide due to unrest and communal conflict.

Both Myanmar’s military, which is backed by helicopters and fighter jets, and rebel groups have a long history of rights violations linked to the decades of conflict, including the use of child labour and drug trafficking.

But Suu Kyi’s ability to rein in the military is limited.

Under the junta-era constitution the crucial interior, home and border ministries are still controlled by the army, giving the generals huge sway over whether the peace process is a success.

More than a dozen rebel factions also plan to hold their own talks later this month in Kachin, with last night’s meeting seen as a stepping stone towards persuading the hold-out groups to embrace the peace process.