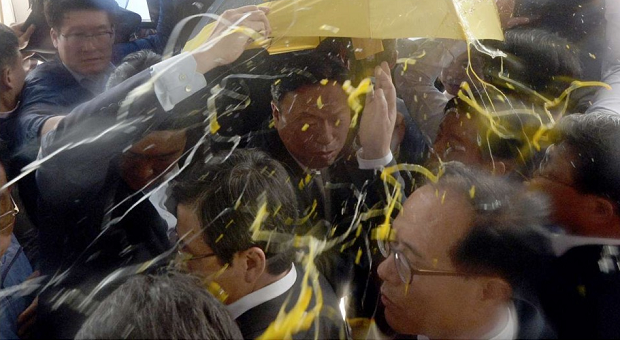 Hwang was in Seongju to try and appease residents who are furious over the joint Seoul-Washington decision to install the Terminal High Altitude Area Defense system, or Thaad, in their town by the end of next year as a deterrent to repeated sabre-rattling by North Korea.

The mob of around 3,000 surrounded a bus that Hwang had taken refuge in to escape the projectile eggs, saying they would not let him go until he promised to retract the decision.

The ongoing standoff lasted several hours and it was unclear when – or how – a compromise would be reached.

The protesters also blocked the entrance to the government compound where Hwang was trapped with a tractor as security guards struggled to keep the crowd at bay.

It was the third consecutive day of protests in Seongju, about 200km south-east of Seoul, where residents say the Thaad deployment will ruin the town’s economic mainstay, melon farming, and cause health and environmental hazards.

“We apologise for not giving you prior notice,” the prime minister had earlier told the gathered protesters – who held banners that read “We absolutely oppose Thaad deployment”.

“The government will do its best so the residents can live their daily lives without any concern,” said Hwang, accompanied by senior government officials including Defence Minister Han Min Koo.

But his speech was cut short as the mod started to pelt the prime minister with eggs and water bottles, TV footage showed.

“You bastard,” a protester shouted, according to local media. “Why would you bring Thaad to Seongju?”

The prime minister’s visit comes a day after President Park Geun Hye told government officials to address concerns among Seongju’s 45,000 residents over Thaad while calling for an end to “needless” squabbling within the country over the issue.

Seoul and Washington last week revealed their decision to deploy the Thaad system in South Korea in the wake of a series of missile and nuclear tests by North Korea.

Tensions are high since Pyongyang carried out its fourth nuclear test in January, followed by various missile launches that analysts said showed the North was making progress towards being able to strike the US mainland.

North Korea last night accused Park of “offering the Korean peninsula to foreign forces as a theatre of a nuclear war.”

“She unhesitatingly sold off the destiny and interests of the nation and undermined regional peace and stability,” the North’s Committee for the Peaceful Reunification of Korea said in a statement carried by Pyongyang media.

“We strongly condemn the North’s nonsensical slandering aimed at dividing our society,” the ministry said in a statement.