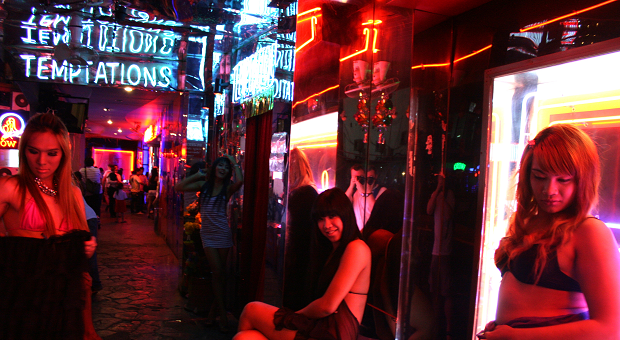 Thailand’s police force has a reputation for graft, but it is rare for authorities to reveal so clearly how the protection rackets work.

More than 100 officers from Thailand’s Interior Ministry raided Nataree Massage, which is in downtown Bangkok and popular with locals and foreigners.

During the last night’s raid they found documents detailing alleged payments worth thousands of dollars to police and city officials.

“The account book with the hush money is very clear in detailing which agencies and persons received the money. Most are police and police agencies,” Ronnarong Thipsiri, director of the Territorial Defence Office, which was involved in the raid, said.

“We did not inform police ahead of the raid because we had information that they were benefiting from this operation,” Ronnarong added.

A photograph of one log book page, taken by local reporters who joined the raid, showed more than US$10,000 worth of payments made to multiple police officers and law enforcement agencies over a 20-day period in March this year.

Ronnarong, who said the photo was legitimate, added that one section of the brothel’s account book showed 19 million baht (US$539,000) in takings, though he did not say over what period of time the money had been made.

The raid also uncovered multiple underage sex workers under the age of 18 inside the brothel, most of them foreign – a stark reminder of how impoverished teenage migrants continue to be lured into Thailand’s sex trade.

Ronnarong said around 90 per cent of the 121 women found working in the brothel at the time of the raid were Myanmar nationals, primarily ethnic minority women from the two country’s border regions.

“Three held documents proving they are under the age of 18,” he said, adding that investigators believed at least 12 others were suspected of being underage.

Prostitution is technically illegal in Thailand but is ubiquitous across the country. Despite its reputation as a global sex tourism destination, the vast majority of sex work caters for locals.

Because of their criminalised status, brothel owners and sex workers often have to offer protection payments to police or criminal gangs to ward off arrest or closure.

Activists have long advocated for the trade to be legalised to better protect the many women, men and transgender people who sell sex commercially. But it is a cause few politicians have been willing to embrace in a country that remains socially conservative when it comes to sex.

Multiple large brothels, which have not been raided, also operate in the area.