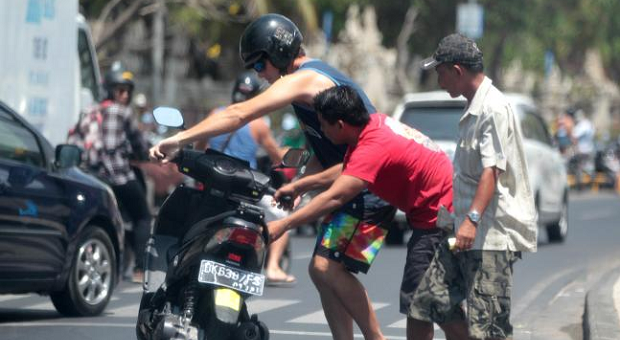 May 24, 2016 – Riding a motorbike in Bali is commonplace for many foreigners, even for those who never drive motorcycles in their own countries. Most of them rent motorbikes in tourist areas like Kuta, Seminyak and Ubud.

This came to the attention of Bali Police after they recorded four deaths of foreign motorcyclists in the first four months of this year.

Bali Police head of public information Adj. Sr. Comr. Sri Harmiti said there were a total of 15 foreigners involved in traffic accidents up to last month.

“Four foreigners died in accidents, while the other 11 foreigners sustained injuries,” she said.

In May, there was a fatal crash that claimed the life of an Australian, Adrian L. Newton. His motorbike hit a truck on Jl. By Pass Ngurah Rai Denpasar. He suffered severe head injuries.

Denpasar Traffic Police chief Comr. I Nyoman Nuryana said that Newton was actually wearing a helmet. His helmet, however, reportedly came off when the accident happened.

“We suspect that he did not use the helmet properly,” Nuryana said.

Nuryana explained that many foreigners who got into motorbike crashes wore helmets, but they did not wear them properly.

“Most accidents with foreign nationals involved are caused by themselves. They lose control and fall down by themselves or hit something in front of them,” Nuryana added.

A motorbike can be rented for between Rp 50,000 ( US$3.65 ) and Rp 100,000 per day. Owners of rentals mostly do not require driver’s licenses from foreigners who want to rent their motorbikes.

They usually only ask them to show their passports and they will take a picture of the passport. That is easier than for domestic tourists who mostly have to bring their ID cards as required.

The Sanglah Hospital’s forensic medicine unit head Ida Bagus Putu Alit said that crash victims usually died from head trauma because they did not wear helmets. “Based on my experience, most traffic accident victims die from head trauma,” Alit said.

Bali Police recorded a total of 486 traffic accidents across the island from January to April this year. In all accidents, 142 people died, 130 people suffered severe injuries and 590 people suffered minor injuries. The financial losses from the accidents amounted to about Rp 1.1 billion.

In 2015, a total of 1,492 traffic accidents occurred across Bali. In the accidents, 504 people died, 254 people suffered severe injuries and 1,890 people suffered minor injuries. The total financial losses caused by them was more than Rp 3.88 billion.

To control the increasing number of traffic accidents, Nuryana said that the police had continuously conducted raids targeting locals and tourists on motorbikes.

“We keep holding raids to warn people about the importance of safety on the road,” Nuryana said.

The Sanglah Hospital recorded that 95 foreigners died in 2015, almost double the 49 foreigners who died in 2014. This year, the figure has also shown an increase as 35 foreigners have died in the first three months. They were both tourists on holiday and expatriates who have been living on the island for years.