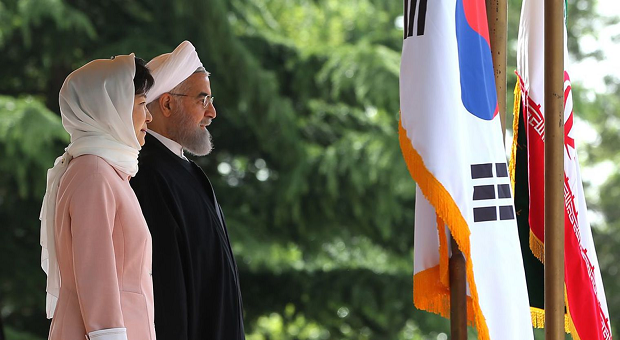 May 3, 2016 – Iran and South Korea have decided to triple their annual trade volume to US$18 billion, President Hassan Rouhani announced yesterday after meeting his South Korean counterpart Park Geun-Hye.

“The two sides decided to increase by three times the current trade volume of around US$6 billion to US$18 billion,” Rouhani said in a joint televised press conference.

“We also spoke about tourism, direct flights between Seoul and Tehran, and Korean investment in Iranian tourism infrastructure, including building hotels,” he added.

Park is the first South Korean president to visit Iran since the two countries established diplomatic relations in 1962, and as Seoul seeks new markets to turn around a lengthy decline in export revenues.

Khamenei said Tehran and Seoul would benefit from “continuous and stable relations”, free from US influence. “Agreements and contracts between the two countries should be made in a way that foreign taxes and sanctions don’t influence them,” Khamenei told Park.

This, he said, was “because it’s not befitting that relations of countries like Iran and South Korea be under the influence and will of the United States. Our priorities are not only trade and commerce, but contracts must be made that are essential to Iran’s infrastructure sector and general economy.”

On the first day of Park’s visit, the two countries pledged to develop their relations in the energy sector. “We will expand relations in energy projects and infrastructure and in oil, gas, railways and ports,” Park said at the news conference with Rouhani.

Tehran hopes this month to increase its oil exports to Seoul to 400,000 barrels per day from a current 100,000 bpd, according to Oil Minister Bijan Zanganeh.

The two governments signed 19 cooperation documents in the presence of the presidents, and further memorandums of understanding were due to be signed by the private sector, Rouhani said.

Woori Bank, in a ceremony yesterday, launched its office in Tehran, becoming the first South Korean lender to have a representative office in Iran, official IRNA news agency reported.

Park’s meeting with Rouhani also included discussions about the situation on the divided Korean peninsula amid fears that Pyongyang is preparing to conduct a fifth nuclear test.