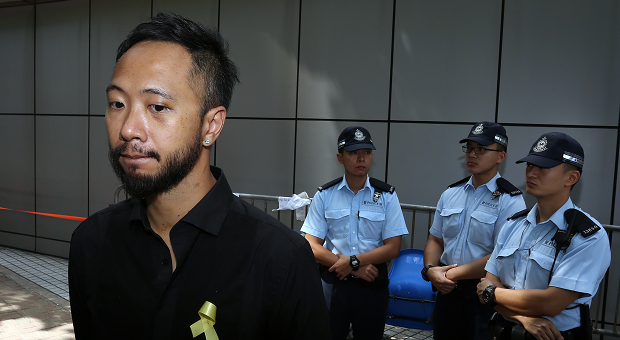 May 30, 2016 – A Hong Kong pro-democracy activist was sentenced to five weeks in prison today after he was found guilty of assaulting and resisting officers during mass rallies in 2014, when he splashed liquid on the police.

Political activist Ken Tsang vowed to appeal the sentence over the liquid splashing incident, which happened the same night he was allegedly beaten by another group of police officers in a brutal attack captured by television cameras and beamed around the world.

Tsang’s is the first conviction for a high-profile figure involved in the rallies, dubbed the “Umbrella Revolution”, which blocked major highways in the city for over two months, with protesters calling for a free vote on the city’s leader.

Activists have accused authorities of going after those at the forefront of the movement.

Tsang was given concurrent sentences – five weeks for one count of assaulting police and three weeks each for two counts of resisting officers during his arrest near the government’s headquarters. He has been bailed pending appeal.

“Up to now he has shown no sign of remorse… I believe a jail term is the only option and it is indeed appropriate,” he told the courthouse, which was packed with Tsang’s supporters.

Tsang, a social worker and a member of Hong Kong’s pro-democracy Civic Party, sat calmly as the sentenced was delivered.

Around 30 supporters, some carrying yellow umbrellas – a symbol of the democracy movement – protested outside the courthouse, shouting “shameful police” and “I want true universal suffrage”.

Tsang has said police brought assault charges against him to distract from the case against them.

The police who allegedly beat him, who are not the same officers Tsang is convicted of assaulting, are to stand trial separately.

The two incidents took place at the height of mass protests seeking free leadership elections in Hong Kong, and rocked the reputation of the city’s police force.

Video footage showed a group of men hauling a handcuffed Tsang to a dark corner in a public park and then one man standing over him punching him while three others were seen repeatedly kicking him.

The officers have pleaded not guilty to the charges and their trial is set to begin on June 1.