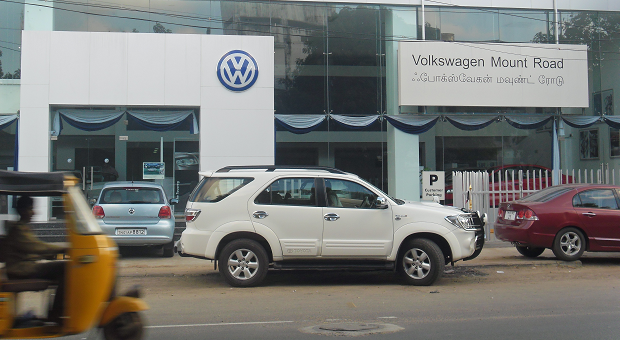 March 29, 2016 – India has become the first country in Asia to export two fully-built inter-city luxury buses to Europe, marking a dramatic shift in its manufacturing capabilities. Swedish auto major Volvo, which started operations in India through the import of a luxury bus from Hong Kong back in 2000, executed the shipment. Its Bengaluru-based plant is gearing up to undertake more of such orders, which is notable because its parent company has a plant in China, too.

Following in Volvo’s footsteps is rival company Volkswagen-owned Scania, which has also set up a manufacturing facility in Karnataka and is working towards its goal of exporting fully-built buses to Europe. Earth mover JCB is not too far behind. Although headquartered in the UK, its India subsidiary has just started exports to Russia.

These companies, which hail from Europe, already have their mother plants based out of that region. However, given India’s strengths in low-cost manufacturing and the government’s push towards Make in India, companies are now actively looking at serving these markets from India.

Stefan Palskog, president of Scania India, said, “From a logistical point of view, there are a lot of countries that are closer to India than Sweden. The logistic cost of a completely-built product is important. In the long run, we will be able to export buses made in Bengaluru to Europe as well.”

While passenger car makers such as Suzuki and Hyundai have been exporting small cars to Europe from India, heavy-duty commercial vehicle manufacturers have just started to warm up to this idea turning India into a manufacturing hub for European exports. Vipin Sondhi, managing director and chief executive of JCB India, said, “We have started with Russia where temperatures are -25 degree centigrade. So, we will go step-by-step there. We are exporting components to the UK from Pune, where they are assembled to be shipped to other parts of the world and we are exporting components to the US.”

Likewise, JCB Daimler India Commercial Vehicle (DICV) has ramped up parts supplies from India as it now reaches across the globe including Europe and the US. Around four million parts have been exported by DICV to other global Daimler entities worldwide.

Erich Nesselhauf, managing director and chief executive of DICV, said, “We export to 20 countries from West Asia, South East Asia and Africa. This will go up to 40 countries soon.”

Developed markets such Europe and the US have very stringent quality and emission requirements, which, according to companies, cannot be compromised. However, Indian companies have not been able to meet these requirements.

KTM branded bikes made in Pune by India’s third largest bike manufacturer Bajaj Auto have been well received in Germany, France, Italy and Spain. More than half of KTM’s production in India gets exported as of date with a substantial chunk being sold in Europe and the US.

Bajaj Auto owns nearly half of KTM, which specialises street and off-road bikes. Serving the developed markets from India comes at a time when the country has fallen short of its announced targets under the 10-year Automotive Mission Plan 2006-16.

Sluggish macro economic factors during the past three years have impacted the pace of growth, resulting in under-achievement of some of the targets. However, some of the targets such as creation of employment for 25 million and investments to the tune of Rs 1.5 lakh crore from auto and component manufacturers, have been achieved.