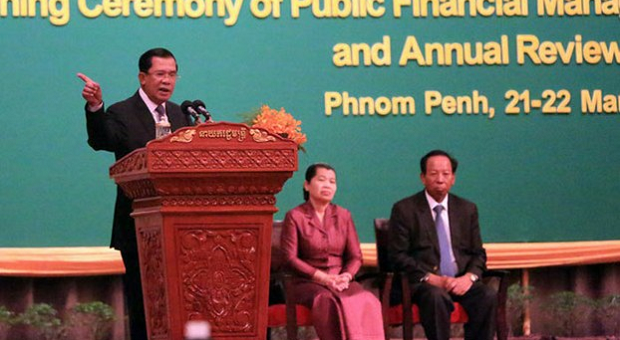 March 23, 2016 – Prime Minister Hun Sen has urged local authorities to ignore a Cambodian Supreme Court ruling in a land-grab case that favored the claim of a local villager in the Banteay Meanchey province over a cadre of soldiers, RFA’s Khmer Service has learned.

The case pitted Tout Sopheak and her family against five soldiers and their families in a dispute over who gets the deed to four hectares of land, a portion of which fronts National Road 5 in the O’Chrov district.

While the Supreme Court in 2011 ruled that the land belongs to the Tout Sopheak family, local authorities have refused to enforce the order against the soldiers who are occupying the land, she told RFA’s Khmer Service.

Getting the court’s order enforced may have become even more difficult after Prime Minister Hun Sen weighed in on the issue after he saw a video the soldiers and their families posted on Facebook that sought his intervention in the dispute.

On Monday, Hun Sen called the ruling an injustice for the soldiers and ordered Banteay Meanchey Governor Koh Sum Saroeuth to cease enforcement of the Supreme Court’s order saying the case is “unusual” and the verdict is “a shame.”

“The soldiers went to defend their country, but when they came back, even their own homes couldn’t be defended,” he said during an event organized by the Ministry of Finance. “Even Minister of Defense Tea Banh has to feel for this.”

Tout Sopheak told RFA that it is the defense ministry that started the dispute in the first place.

While the soldiers and their families have been living on the land since early 1990s, it was the military that forced her and her family off the land.

The pregnant woman claimed that her family cultivated rice on the land of from 1989 to 1993, but stopped when the soldier commanding the unit stationed nearby confiscated their tractor and the soldiers started farming the land for themselves.

“The commander stopped my father from growing any rice on the land where he used to grow rice,” she told RFA.

While that commander died in 1997, the soldiers continue to treat the land as their own, she said.  Khut Tol, commander of Small Battalion 511 and Tout Sopheak’s brother-in-law, refuses to honor the Supreme Court verdict, Tout Sopheak said.

“For more than four years now, the problem has not been solved,” she said. “Even to the point that Khut Tol threatened to shoot my father in front of the land conflict committee.”

Khut Tol told RFA he wasn’t a sore loser, but that the decision treats the soldiers’ families unfairly.

“When the Banteay Meanchey Court’s Chief Prosecutor  Phann Vanrath came and asked me to move my home out of the controversial lands, I asked: What is the reason for the move?” he told RFA. “Five families depend on that land.”

While the case is important to the families embroiled in the dispute, enforcing the verdict may be more important for Cambodia as a whole, said ADHOC Coordinator Mr. Sum Chan Kea.

“Interference with the court system will bias the results of the case,” he said. “In order to build trust with the people that the court is the institution independent from the executive, the final verdict of the Supreme Court should be enforced.”

The seizure of land for development, often without due process or fair compensation for displaced residents, has been a major cause of protest in Cambodia and other authoritarian Asian countries, including China and Myanmar.