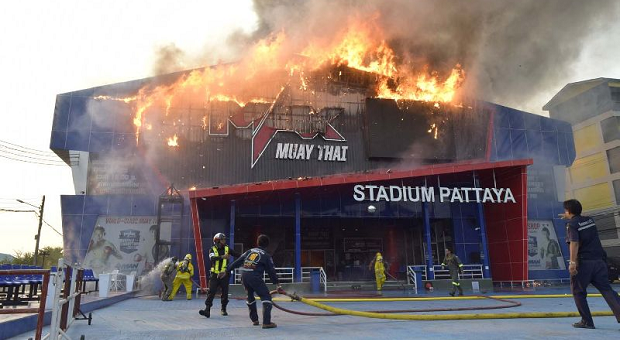 It took a little more than an hour for firefighters to extinguish the fire at the Max Muay Thai Stadium on Soi Sukhumvit-Pattaya 42 in Central Pattaya. The stadium’s manager and three staff members were treated for minor burns, police said.

Police Col. Sukthat Pumpanmuang of Pattaya police station said over the phone Friday morning that police are investigating the cause of the fire. Witnesses told police that the air conditioning system was being serviced Thursday before the explosion, Sukthat said.

Stadium owner Nawat Tocharoensuk, a Pheu Thai party politician, said the fights will go on at a temporary venue. The severely damaged building will be renovated as quickly as possible, he added.

The one-story stadium opened in November 2014 and has become well-known in the local Thai boxing scene and with foreign fans as the arena for Channel 8’s Sunday “Max Muay Thai” program.