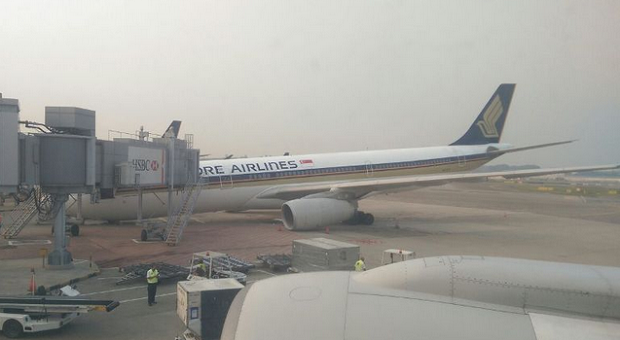 In response to queries, SIA said the nose gear of the aircraft retracted while the aircraft was at Gate A17 undergoing a landing gear system check at around 8am on yesterday morning. At the time of the incident, there were no passengers or crew on board, but an engineer was on the aircraft.

The engineer was not hurt, added the airline.

SIA said the Airbus A330-300 is registered as 9V-STG, and had last operated flight SQ835 which arrived in Singapore from Shanghai at 12.49am. The aircraft was next due to have operated SQ890 to Hong Kong yesterday morning.

However, another aircraft was used for that flight due to maintenance being carried out on the plane involved in the incident, said the airline. According to online flight schedules, SQ890 was scheduled to depart at 7.35am on Sunday morning, but took off instead at 8.18am.

“We do not have details of damage to the aircraft at this point. An assessment will be carried out after it is removed from the gate,” said SIA. “Singapore Airlines will be co-operating fully with the authorities in their investigations.”

Photos showed the nose of the plane tilted downward on the tarmac of Changi Airport next to an aerobridge, and the photos appear to show that the front door of the plane was torn off.