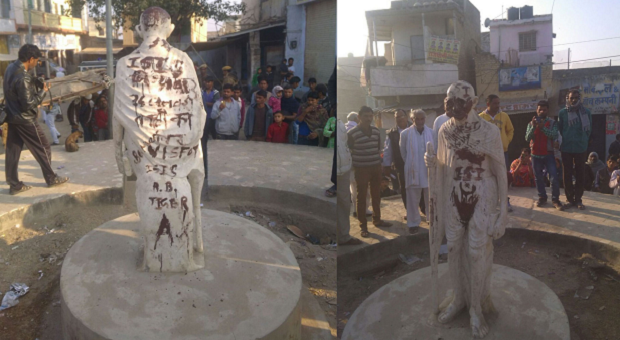 On one portion, the suspects wrote “ISIS zindabad” on the statue. Zindabad originates from Hindu and Persian and means “long live.” It is often used to cheer for someone or something.

Superintendent of Police in Dudu Sanjay Kumar also said the message contained threats of a possible attack on January 26.

India celebrates Republic Day on January 26 to commemorate the implementation of their constitution in 1950. It was also the day in 1930 when the Indian National Congress declared independence from the United Kingdom.

The incident caused outrage among the residents, who closed down the markets as they protested immediate arrests. The police issued “an FIR [First Information Report] under IPC [Indian Penal Code] sections pertaining to sedition and promoting enmity between different groups on grounds of religion.”

Despite the action, the police stated they believe it “to be an act of some miscreant.” The locals cleaned the statue after forensics examined it.

“The arrests confirmed the presence of ISIS in India for the first time, transforming what was till now a concern into an actual security threat,” wrote the Times of India. “The ISIS cell members, according to the police, said they were close to preparing IEDs and procuring weapons on the instruction of handlers who they were in touch with over VOIP, WhatsApp and Facebook.”

A group known as Hindu Swabhiman trained 15,000 fighters to fight against the Islamic State. The Times of India discovered child soldiers among the group, with one leader claiming they must “catch them young.”

“We have over 50 training centres all over western UP. Our students are from ages eight to 30,” explained Chetna Sharma. “We don’t give guns and swords to children straight away. For the first six months, we train them mentally. We teach them verses from the Gita. Hindus must not be afraid of death because we are reborn. The children here are fearless.”

Another leader asserted they must teach the children to defend themselves because the government has not done enough to protect the country.

“I am learning to fight because our mothers and elder sisters are threatened. I have to protect them as well as myself,” said one of the children, aged 8.