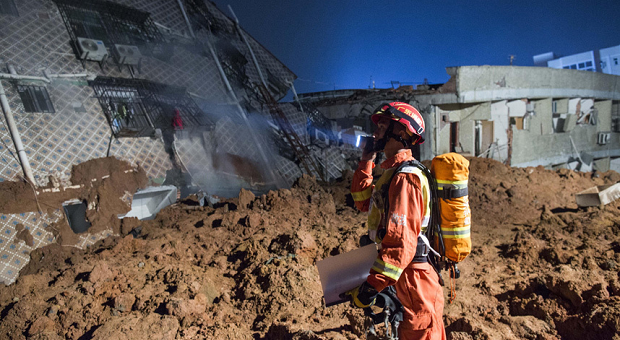 December 22, 2015 – Rescuers struggled to claw away a massive mound of mud engulfing an industrial district in China today in a desperate bid to find survivors among 76 missing people following a landslide that occurred despite multiple warnings.

Hopes for those still missing in the mud were fading, almost three days after the landslide, even as heavy machinery raked through thousands of tonnes of soil and rubble that buried factories and residential buildings.

The government revised the number of missing down from 81 to 76 after contacting some of the unaccounted for, officials said during a press conference. A body discovered the same morning remained the first and only confirmed death.

The latest in a series of fatal accidents in the world’s most populous country, the tragedy in Shenzhen came only months after almost 200 people died in a massive chemical blast in the port city of Tianjin.

The mudslide was caused by the improper storage of waste soil from construction sites, according to the official newspaper of the Ministry of Land and Resources.

Soil was illegally stored in heaps 100 metres (330 feet) high at an old quarry site and turned to mud during rain Sunday morning, according to the Global Times, afflated with Communist Party mouthpiece People’s Daily.

Documents on the web site of the Guangming New District, where the landslide occurred, show that authorities were aware of problems with the storage and had urged action as early as this July.

In an announcement dated July 10, officials said that work at the site was not being carried out according to approved plans and ordered the Hongao Construction Waste Dump to “speed up” work to bring its operations into line.

The government issued a second warning in September, noting that the dump’s permit to receive waste had expired and authorities had made it clear that dumping should cease.

The city had “pointed out problems at the site and requested steps to correct them”, the statement said.

“The lack of safety supervision and passive attitude in taking precautions has caused the whole nation to shake with anger and shocked the world!” user Xizidan wrote in a post that was taken down by authorities, but found on the censorship tracking website Weiboscope.

The post said people were angry over accidents including the blasts at Tianjin in August, the sinking of a ferry on the Yangtze river in June that killed more than 400, and a stampede in Shanghai last New Year’s Eve that left over 30 dead.

“Through man-made disasters, we’re continually using other people’s lives to achieve progress in society,” another post said, echoing a common complaint that China’s rapid economic growth has been achieved at the expense of many of its people.