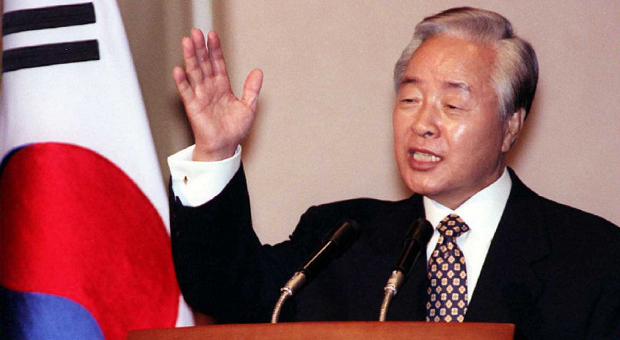 November 26, 2015 – South Korea held a state funeral for former President Kim Young-Sam at the National Assembly earlier today. Mr Kim died on Sunday at the age of 87, three days after he was admitted to hospital with a fever.

The government has asked citizens to fly the national flag at half-staff and public servants also donned black ribbons and black ties to show their respect. Mr Kim was an outspoken critic of the country’s military dictators and was South Korea’s seventh President from 1993 to 1998.

Mr Kim was only 26 when he became a lawmaker in 1954, making him the youngest member of the legislative house. But he was expelled in 1979 for his anti-government activities and opposition to then-President Park Chung-hee – the father of current President Park Geun-hye.

Mr Kim was known for his outspoken criticism of the elder Park, who took power following the 1961 coup. He also railed against Chun Doo-hwan, an army major general who engineered another coup after Park Chung-hee was assassinated.

The late Mr Kim was often seen alongside students at protests in the 1980s, rallying for democracy in the country. For these activities, he was barred from politics and put under house arrest.

“He was not just the centre of Korean politics, but he was the pillar of Korean democracy,” said Choi Chang-ryul, a professor at Yong In University. “Park Chung-hee and Chun Doo-hwan governments were at the core of the democracy versus anti-democracy structure. Within that structure, he achieved democracy and witnessed everything happen.”

Mr Kim ran for President in 1987 but lost to Roh Tae-woo, who was also a military man. He finally won in the 1992 presidential election, and became South Korea’s first civilian leader after more than three decades of military rule.

During his five-year term, two former military leaders were indicted on mutiny and treason charges stemming from a coup.  But Mr Kim pardoned them at the end of his rule.

Mr Kim was also known for transforming the country’s murky financial system. For instance, he stopped Koreans from owning bank accounts under pseudonyms – politicians and businessmen were widely known to use bank accounts under borrowed names to hide slush funds.

“The whole nation probably knows, but a real-name financial system to this day is not fully enforced even in countries like Japan,” said Mr Choi. “He immediately implemented the system and opposition from people of power was immense. Everyone takes the system for granted now, but during that time, it was hard to even imagine such a thing.”

On the diplomatic front, Mr Kim’s believed to have prevented the United States from launching an attack in 1994 on North Korea’s main nuclear complex. But despite these achievements, he was also accused of mismanaging the economy during the 1997 Asian financial crisis for which his government accepted a US$57 billion bailout from the International Monetary Fund.

During the five days of mourning, Koreans from across the country paid their last respects to Kim Young-sam – who will be remembered for his unrelenting fight against the country’s authoritarian leaders, and bringing democracy to South Korea.