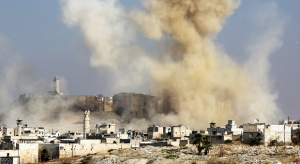 November 18, 2015 – Tens of families of the Islamic State (IS) militants and commanders have started relocating from Syria to Iraq after heavy French airstrikes, a monitor group reported today.

Most of those families are either foreign or Arabs and have chosen to relocate from Syria’s northeastern province of al-Raqqa, the de facto capital of the IS, into the Iraqi city of Mosul, said the Syrian Observatory for Human Rights.

The UK-based watchdog group said those families claim that Mosul, which is also under the IS control, has become safer than al-Raqqa, which has been heavily pounded by French airstrikes recently after the terror group claimed responsibility for deadly attacks in Paris earlier this week that killed over 120 people.

The Observatory, which relies on a network of activists on ground, said at least 33 IS militants were killed over the past three days as a result of the intensified French airstrikes.

On Sunday, the French warplanes started its retaliation strikes against the IS, hitting the terror group with 30 airstrikes in a single day.

The strikes targeted the city of al-Raqqa and its surroundings, amid a state of alert among IS militants in the city, according to the Observatory.

The French Defense Ministry said Sunday that French warplanes conducted a series of “massive” airstrikes on al-Raqqa, destroying a key IS command center and a training camp.

“The raid including 10 fighter jets was launched simultaneously from the United Arab Emirates and Jordan. Twenty bombs were dropped,” a statement said.

The French airstrikes came as part of the French retaliation against the bloody attacks in Paris on Friday, in which gunmen and bombers with the IS attacked restaurants, a concert hall and a sport stadium, leaving at least 129 people and injuring hundreds more.