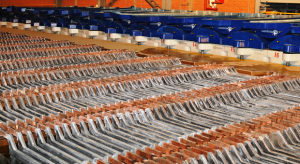 November 23, 2015 – Copper producer Central Asia Metals is due to kick off an expansion at its Kounrad recovery project in Kazakhstan after it got the green light from the state authorities.

The approval allows it to exploit the copper contained in the Western dumps, said the firm, which also revealed a record monthly production of the red metal in October.

Sourcing of materials and equipment for stage 2 is now in train, with the programme’s capital cost remaining within the US$19.5 million estimate.

Nick Clarke, chief executive, told investors: “Whilst a formality, this state approval offers a clear indication of the Kazakhstan government’s readiness to support foreign investors, and it enables CAML to fully commit to the second phase of the Kounrad project’s expansion.”

Last month, the company boss noted how since its float in  2010, Central Asia had raised $60 million and had constructed the Kounrad plant on time and under budget, and produced over 36,600 tonnes of copper at an average C1 cost of $0.72 per pound.

Today, the miner said the second part of the year had seen an uplift in production volumes, and a record monthly production of 1,285 tonnes of copper was seen in October.

“This increase, together with an approximate 65% devaluation of the Kazakhstan Tenge against the US Dollar, results in downward pressure on the unit cost of production,” highlighted the company.