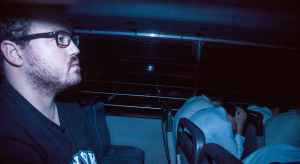 The crime shocked the city in November when police found the nearly decapitated body of one of two women in a suitcase and the second woman bleeding to death Jutting’s apartment floor.

In his last court appearance in May, the former Bank of America-Merrill Lynch employee did not officially enter a plea, but when pressed also did not object to a not guilty notation taken down by the magistrate to transfer the case to the High Court.

After undergoing two weeks of psychiatric evaluation last year, the court decided he was fit to stand trial. He has been in police custody since the initial arrest.

It remains unclear what sort of defence Jutting’s lawyer is mounting.

On Nov 1, Jutting called the police to his upscale apartment near Hong Kong island’s Wanchai area, a red light district known for its nightlife.

A grisly scene greeted the police. In the living room, a naked woman, Indonesian Seneng Mujiasih lay bleeding from knife wounds and later died from her injuries.

They also found another body, that of Indonesian Sumarti Ningsih, stuffed into a suitcase on the balcony.

Both entered the city has domestic helpers but police are investigating if they were working in the sex trade.

The prosecution will be introducing some 200 pieces of evidence in their case against Jutting.

He moved to Hong Kong from London in July 2013 and it was understood that he quit his high-paying job just days before the incident.

Jutting’s pre-trial is scheduled for Aug 24 next year before his 20-day full trial from Oct 25 to Nov 21.