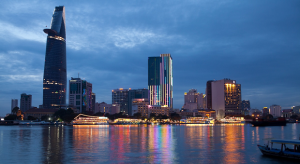 October 5, 2015 – The World Bank forecast that the Vietnamese economy will grow at a speed of 6 per cent in 2015, according to the East Asia and Pacific Economic Update released today.

Vietnam News Agency (VNA) reported that the country’s poverty rate is expected to reduce with extreme poverty, which is currently set at living on US$1.90 per day or less, tapering off from 2.8 per cent in 2012 to 1 per cent in 2017.

The report also pointed to challenges facing the country, such as slow growth, unstable elements spurred by the country’s dependence on trade and decreases in the prices of rice and other farm produce.

It recommended that Vietnam outline a plan to consolidate mid-term financial conditions while carrying out reforms to fortify finances for State-owned enterprises and banks.

Meanwhile, the World Bank expected the East Asia-Pacific region’s economy to expand by 6.5 per cent in 2015, lower than the 6.8 per cent growth of last year.

East Asia will create global momentum as it accounts for almost two-fifths of the world’s economic growth, the World Bank said.

It highlights that the region needs to prioritise prudent macro-economic management to tackle financial issues as well as deepen economic restructuring with a focus on private investment.

The reforms are comprised of regulatory improvements in the finance, labour and product market and measures intensifying transparency and accountability, he said.