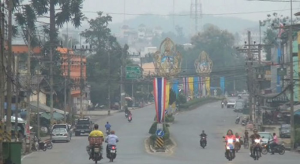 October 22, 2015 – Officials say the southern parts of Thailand have been hit by the most severe haze ever from forest fires in Indonesia, forcing all schools in a province to close and disrupting flights at a popular tourist area.

They said haze that has shrouded parts of Malaysia and Singapore for nearly two months reached hazardous levels in southern Thailand, with the pollution index hitting a record high of 365 in the city of Songkhla today.

Southern Environment Office head Halem Jemarican called it “a crisis.” He said the pollution index in southern Thailand has never exceeded 300 before.