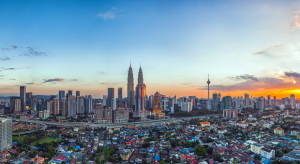 October 29, 2015 – Rain and favourable winds have brought clear skies to vast areas of Southeast Asia stricken for weeks by hazardous smoke from Indonesian fires, with officials expressing hope today that the crisis could end soon.

Parts of Indonesia, Malaysia, and Singapore enjoyed the cleanest air in weeks, while affected areas of the Philippines and Thailand also have seen an end to pollution that has sickened tens of thousands and caused flight cancellations and school closures.

Malaysia’s top weather forecaster went so far as to declare that the region’s rainy season was beginning. Some experts have previously warned the El Nino weather phenomenon could delay the rains for months, prolonging the environmental disaster.

“The northeast monsoon has arrived. It is the raining season for Malaysia,” said Che Gayah Ismail, director-general of the country’s Meteorological Department. “We should have blue skies and no more haze because the northeast monsoon winds will blow the haze from Indonesia’s forest fires into the Indian Ocean,” she said.

Recent rainfall on the huge islands of Sumatra and Borneo, where hundreds of forest and agricultural fires have smouldered for weeks, have helped reduce the smoke clouds, said Indonesia’s disaster agency spokesman Sutopo Purwo Nugroho.