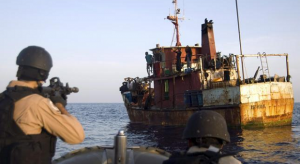 October 20, 2015 – Maritime crimes have shot up in South-east Asia and the Singapore Strait in particular needs a stronger security presence, maritime research firm Dryad Maritime said in a press release today. Noting the “apparent impunity of maritime gangs operating in the region”, it said the situation could get worse in the fourth quarter of the year.

The number of reported crime incidents in the first nine months of this year was 194, up 38.6 per cent from 140 in the corresponding period last year, it said.

However, it added that the figures for Q3 “represent a decrease on Q2”, without providing any Q3 or Q2 figures.

Within South-east Asia, the Singapore Strait accounted for a significant portion of incidents in January through September 2015. Dryad said there were 90 instances of theft or attempted theft in the Strait during these nine months, with more than 80 per cent of those occurring in the Traffic Separation Scheme between Pulau Karimun Kecil and Pulau Besar “during the hours of darkness”. It did not provide any other figures for the Singapore Strait.

Dryad said the main focus for criminal gangs in the region has been the petty thefts of ship stores, as gangs look to steal engine parts and high value machinery for resale on the black market. It warned that the final three months of 2015 are likely to see a further increase in hijackings and petty thefts.

“In Southeast Asia, the final quarter of the last three years has seen the highest numbers of incidents per quarter and we see no reason why this will not remain the same this year; a year in which we’ve already seen the highest number of incidents in the first nine months. There is a pressing need for a joined-up security effort in the Singapore Strait and other areas. Without a high visual presence from security agencies, criminal gangs will continue to operate freely with little fear of capture or prosecution,” said Dryad’s chief operating officer Ian Millen in a statement.