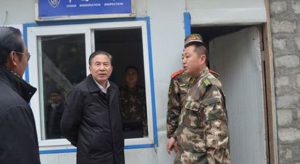 October 30, 2015 – A former top Chinese security official in Tibet will be prosecuted for suspected corruption, the ruling Communist Party’s anti-graft watchdog said on Friday, in a rare example of corruption-busters going into the restive and remote region.

Le Dake, who was deputy head of Tibet’s regional legislature when an investigation into him began in June, is suspected of abuse of power and bribery, the Central Commission for Discipline Inspection said.

He has been expelled from the party and his case handed over to the legal authorities, it said, meaning he will be prosecuted. The statement provided no other details and it was not possible to reach Le for comment.

According to his official biography, Le was head of the State Security Department in Tibet from 2004 to 2013.

President Xi Jinping has vowed to combat deep-seated corruption since assuming power in late 2012, although areas of China with big minority populations, such as Xinjiang and Tibet, have largely escaped the campaign so far.

State media said in January that anti-graft authorities had found 15 senior Communist Party officials in Tibet guilty of corruption last year and had punished them.

China has ruled Tibet with an iron hand since People’s Liberation Army troops “peacefully liberated” the region in 1950.

Tibetan parts of China erupted in widespread anti-Chinese protests in 2008, and what China calls the Tibet Autonomous Region remains under tight security.

In a separate statement, the anti-graft watchdog said Gu Chunli, who was a vice governor of the northeastern province of Jilin, had also been expelled from the party and would be prosecuted for suspected corruption.

It was also not possible to reach him for comment.