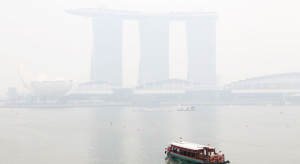 September 10, 2015 – Haze from forest fires raging in Sumatra and Kalimantan has reached Singapore and Malaysia, sending air pollution indexes there to dangerous levels.

Singapore’s Pollutants Standard Index hit its highest level this year this afternoon, the Straits Times reported, with the city-state’s health ministry warning residents to cut back on outdoor activity.

The three-hour PSI measured 138 at 4 p.m. local time. Any reading above 100 is deemed unhealthy.

In Kuching in the state of Sarawak, on Malaysian Borneo, the Air Pollutant Index reached 137 earlier this morning, well into unhealthy territory, the Star Online reported. The haze also brought visibility at the city’s airport down to 400 meters, prompting flight disruptions for a second straight day.

The Asean Specialized Meteorological Center yesterday upgraded its haze alert to level 3, the highest on its four-point scale, citing an “escalation” of fires in Kalimantan, the Indonesian portion of the island of Borneo.

“The prevailing dry weather in Kalimantan has led to a further escalation of hotspot activities there in recent weeks,” it said.

“In the coming days, the current dry weather conditions over Kalimantan are expected to persist. Under the prevailing wind conditions, transboundary smoke haze could continue to spread to Sarawak and other parts of the region,” it added.

The ASMC’s haze alert for Sumatra has been at level 3 since Sept. 2.