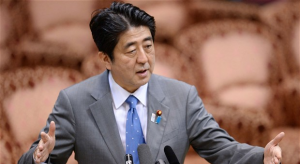 September 17, 2015 – Japanese Prime Minister Shinzo Abe will make a historic five-nation tour of Central Asia next month in an apparent countermove to Russian and Chinese plays for influence in the energy-rich region.

Tokyo is finalizing an itinerary spanning Turkmenistan, Tajikistan, Uzbekistan, Kyrgyzstan and Kazakhstan. Abe will meet with each country’s leader during the Oct. 22-28 tour. His government had eyed early September, but an extended legislative session threw off his schedule.

Shinzo Abe will become the first Japanese prime minister to visit Turkmenistan, Tajikistan and Kyrgyzstan. A predecessor, Junichiro Koizumi, traveled to the region in 2006.

Ties between these five former Soviet republics and Moscow still run deep. The region is “Russia’s backyard,” a Japanese government source says. Nearby China is trying to ingratiate itself with these countries. The presidents of all five except Turkmenistan attended this month’s Victory Day celebrations in Beijing. These four countries, together with Russia and China, form the Shanghai Cooperation Organization, a talking shop to promote relations in economics, security and other areas.

“Japan is lagging far behind in building relationships in the region,” a senior government official said.

Shinzo Abe sees his Central Asian trip as a way to raise Japan’s presence there with a view to increasing energy security.