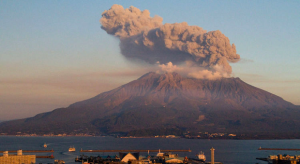 September 14, 2015 – Japan today warned tourists to keep away from popular Mount Aso after it began belching smoke and ash into the air, the latest eruption in one of the world’s most volcanically active countries.

Authorities issued their third-highest alert and cancelled more than a dozen flights after the huge volcano on the southwestern main island of Kyushu shot a column of ash several thousand metres (a few thousand feet) into the clear sky.

“The black and grey column at one point appeared to be weakening, but it’s growing bigger again.”

Local authorities evacuated about 30 tourists and shop workers who were near the volcano, the official said, adding that they have set up a four-kilometre (2.5-mile) no-go zone around the crater.

The government said there were no immediate reports of injuries or casualties from the eruption, but the meteorological agency warned any tourists nearby to evacuate quickly.

Prime Minister Shinzo Abe said troops, police and firefighters had been deployed to check if the eruption had caused any damage or casualties.

“We are doing our best to secure people’s lives by working together with local governments,” Abe told reporters in Tokyo.

The 1,592-metre (5,253-foot) Aso, a popular tourist spot, has been rumbling into life since last year and in August the meteorological agency issued an alert after picking up increasing seismic activity around the volcano Sakurajima, to the south.

There are scores of active volcanoes in Japan, which sits on the so-called “Ring of Fire”, a volatile tectonic zone that records a large proportion of the world’s earthquakes.

In June, search teams returned to the peak of Mount Ontake in central Nagano prefecture for the first time in eight months to look for the bodies of six climbers still missing after an eruption that killed dozens.

The shock explosion was Japan’s deadliest in almost 90 years, leaving an estimated 63 people dead, many of their bodies at least partially entombed in volcanic sludge.