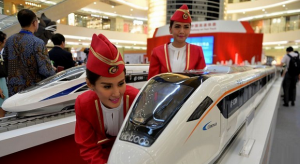 September 4, 2015 – Indonesia has unexpectedly dumped much-vaunted plans for its first high-speed railway in favour of a slower and cheaper rail option, in a blow to Japan and China who have been fiercely competing to win the construction job.

President Joko Widodo was expected to announce the winning bid for the multi-billion dollar infrastructure project this week, but instead his chief economics minister, Darmin Nasution, told the Japanese ambassador today that the hotly contested project had been shelved.

The two Asian powerhouses had been locked in a contest for months to build the railway, a line connecting the sprawling capital Jakarta with the mountain-fringed city of Bandung about 160km away. “Both proposals extended by our government and the Chinese government are not accepted,” Japanese ambassador Tanizaki Yasuaki told reporters.

Darmin Nasution said he would deliver the same news to Chinese ambassador Xie Feng later in the afternoon.

Widodo had commissioned an independent review into the high-speed rail line, which if completed would not only have slashed travel time between Jakarta and Bandung but paved the way for an expanded network linking the capital with Indonesia’s second-largest city Surabaya in East Java.

Presidential chief of staff Teten Masduki told AFP that Widodo had concluded a medium-speed rail option was better value, saving 30 per cent on costs. “The president was very careful in deciding this, and has picked this one,” he said, referring to the slower, cheaper rail alternative.

The news is particularly bad news for Japan, a top-three investor in Indonesia with massive stakes in the automotive, mining and manufacturing sectors. Tokyo, with its rail expertise and infrastructure record, seemed destined to build the high-speed rail line until Widodo announced in April that China had entered the race with a counter offer.

China and Japan had both intensified efforts to win the contract in recent months, dispatching lobbyists to Jakarta and sweetening deals to woo the administration.

Indonesia says it is not discounting the possibility of inviting other countries to bid for its medium speed rail project after it rejected proposals by Japan and China.

Indonesia’s chief economic minister said there are many other countries that have the capacity to build the rail system.

“We will invite China and Japan after the framework has been completed. But it’s possible other countries will be included because there are many countries who are able to build high-speed and medium-speed trains,” said Darmin Nasution.
However, he stressed that the project would strictly be privately funded with the participation of Indonesia’s state-owned enterprise.

The Japanese ambassador expressed his regrets, saying: “On request by the Indonesian government, our government extended our cooperation to do the feasibility study for high-speed railway.”

The Japanese took three-and-a-half years to complete the feasibility study before the Chinese joined in the bid. The ambassador said Japan will study the new proposal once it has been officially been presented.