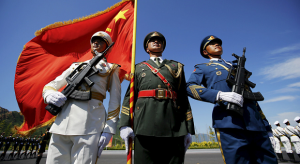 September 1, 2015 – The importance for China of this coming Thursday’s parade celebrating the 70th anniversary of the end of WWII in the Asia-Pacific cannot be overstated enough.

The Japanese surrender was formally signed on the USS Missouri in Tokyo Bay on September 2.

Yet in China, the key date was actually September 9 in Nanjing at 9am. As this China Daily piece stresses, Beijing’s choice for 9-9-9 was immensely symbolic, as the words ‘nine’ and ‘enduring’, in Mandarin, sound practically the same.

And to think that China at the time was led by nationalist Chiang Kai-shek, comprehensively defeated four years later by the Communists. The initial impulse of China’s leadership was focused on counterpunching aggression with generosity and reconciliation.

From the start, it would be an extremely steep mountain to climb. Here is a detailed portrait of how the war trauma lingered in Hong Kong.

The parade rolling past Tiananmen Square officially celebrates the Chinese People’s War of Resistance Against Japanese Aggression. This is an extremely serious, and sensitive, business for 1.4 billion Chinese and the Chinese diaspora all across the world.

And once again, the West – displaying trademark cultural/historical insensitivity, has blown it. Beijing is carefully scrutinizing the diplomatic ramifications of shows and no-shows. Symbolically, absences speak volumes.

President Vladimir Putin will be in Beijing, as well as leaders of the four Central Asian ‘stans’ that are part of the Shanghai Cooperation Organization (SCO). South Korean President Park Geun-hye, South African President Jacob Zuma and Pakistan’s President Mamnoon Hussain will also be present.

Prime Minister Shinzo Abe of Japan won’t (he was officially invited, and declined). The US, Germany and Canada will send only embassy functionaries. France and Italy at least will send their foreign ministers. The only head of state or government from the all-sorts-of-plague-ravaged EU will be Czech President Milos Zeman.