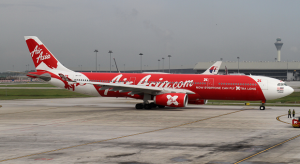 September 15, 2015 – AirAsia X Bhd is in talks with Airbus Group SE to delay more planes due for delivery in the next two years as the long-haul arm of South-East Asia’s biggest low-fare carrier takes steps to improve its financial standing.

The airline has received three of the eight aircraft planned for 2015, with one more scheduled to arrive in October, chief executive officer Benyamin Ismail said in an interview recently.

AirAsia X would like to rework the schedule for the other four planes due this year and the nine it was supposed to take in 2016 and 2017, he said.

“We just want to make sure Airbus assists us in helping manage our capacity moving forward,” Benyamin said from the company’s head office in Sepang, outside Kuala Lumpur.

“We are not saying that we are not going to take it; what we are saying is give us a bit more time to take it later.”

Airbus is in regular contact with its customers, but the company doesn’t comment on specific discussions with individual airlines, Sean Lee, a company spokesman, said in an e-mail.

The net loss at AirAsia X widened to RM132.9mil in the second quarter from RM128.8mil a year earlier.

AirAsia group has hedged 56% of its 2015 oil needs at US$88.26 a barrel, preventing it from taking full advantage of a plunge in crude prices to reduce costs. Crude is hovering around US$45 a barrel, with Goldman Sachs Group Inc predicting prices may fall to as low as $20.

Investors have sent AirAsia X shares down 73% in the past year. To help restore confidence, the company is focusing on boosting passenger yields after trying to fill seats “at all cost” earlier, Benyamin said.

The carrier also wants to convert part of its existing order for A330ceo planes to the newer A330neo model, which is more fuel efficient and could allow it to fly longer routes to European destinations such as London, Benyamin said. AirAsia X also plans to start flights to Hawaii and the Japanese city of Sapporo this year.

AirAsia X is working on turning around about a quarter of its 26 routes which are still unprofitable, Benyamin said. These are mainly to South Korea, where an outbreak of Middle East Respiratory Syndrome hurt travel demand earlier this year.