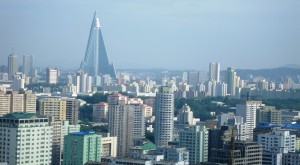 August 13, 2015 – North Korea today condemned a looming South Korea-US joint military exercise as a “declaration of war” and boasted of its ability to make retaliatory strikes against Seoul and the White House.

The annual, two-week “Ulchi Freedom” exercise, which kicks off Monday, involves tens of thousands of troops in what is a largely computer-simulated rehearsal for a North Korean invasion. It is one of a number of annual joint drills that Washington and Seoul insist are purely defensive in nature, but which Pyongyang condemns as provocative rehearsals for a full-scale attack on the nuclear-armed North.

This year’s Ulchi Freedom comes at a time of particularly heightened tensions, following a recent landmine attack on a South Korean border patrol that Seoul blamed on North Korea.

A statement by the North’s Committee for the Peaceful Reunification of Korea (CPRK), which oversees cross-border issues, denounced Ulchi Freedom as a “drill for a surprise nuclear war” against the North.

“Such large-scale joint military exercises… are little short of a declaration of a war,” the statement said, warning of the potential for an accidental military clash that could trigger an “all-out” conflict.

Echoing a threat it has made repeatedly in the past, the committee said South Korea and the United States should be aware that their “strongholds of aggression and provocation”, including the White House and presidential Blue House in Seoul, were in range of the North’s “ultra-precision” military weapons.

North Korea has an extensive missile development programme to complement its nuclear weapons strategy, although experts are divided as to how advanced its delivery systems are.

In May, the North claimed to have successfully test-fired a submarine-launched ballistic missile (SLBM) – a technology that could eventually offer a survivable second-strike capability.

A fully developed SLBM capability would take the North Korean nuclear threat to a new level, allowing deployment far beyond the Korean peninsula.

But numerous experts questioned the authenticity of the May test, saying photos of the launch might have been digitally manipulated.

And North Korea has never conducted a test to back its claim to have a working inter-continental ballistic missile capable of reaching the continental US. Ulchi Freedom will kick off amid elevated cross-border tensions following the recent mine attack that maimed two South Korean soldiers.

Pyongyang has yet to react to the charge that it was responsible, but the South has already responded by resuming high-decibel propaganda broadcasts across the border, using batteries of loudspeakers that had lain silent for more than a decade.

Officials in the South say restarting the broadcasts is only the “first step” in a series of retaliatory measures.